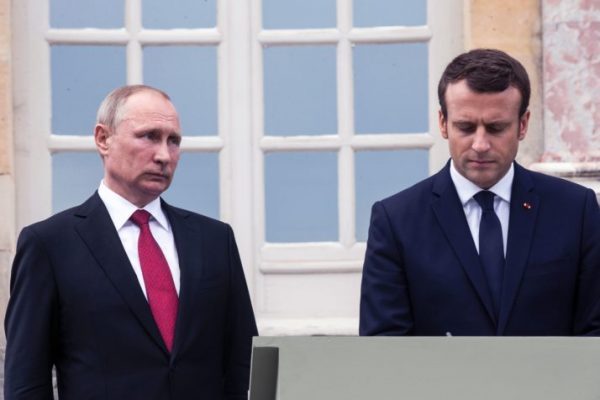 French President Emmanuel Macron (R) and Russian President Vladimir Putin sign the golden book after a visit of an exhibition about Russian emperor Peter the Great at the Grand Trianon following their meeting at the Versailles Palace, near Paris, on May 29, 2017. . / AFP PHOTO / POOL / Etienne LAURENT (Photo credit should read ETIENNE LAURENT/AFP/Getty Images)
Share:

French President Emmanuel Macron on Thursday said he hoped the United States and North Korea would continue working towards denuclearizing the Korean peninsula after U.S. President Donald Trump called off a planned summit.

Speaking in a joint press conference with Russian President Vladimir Putin in Saint Petersburg, Macron said he hoped Trump’s move “was just a glitch in a process that should be continued”.

Putin said Moscow regretted the cancellation of the summit between the United States and North Korea, scheduled for next month. He said he hoped it would take place nonetheless.

Putin also told the news conference that Russia appreciated efforts by Europe to save the Iran nuclear deal despite the withdrawal of the United States and warned of “lamentable consequences” if it was not preserved.