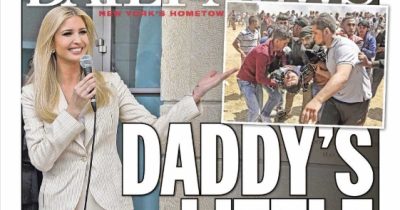 The New York Daily News attacked Ivanka Trump, labeling her “Daddy’s Little Ghoul” in an attempt to link her to the deaths of Palestinians in Gaza.

The cover of the notoriously anti-Donald Trump paper showed the first daughter at the dedication ceremony for the new American embassy in Jerusalem on Monday.

However, rather than showing the freshly unveiled seal of the United States, which Trump stood next to at the ceremony, the Daily News superimposed a picture of a bloody child, apparently injured during the Gaza protests.

The bottom of the page, meanwhile, read, “55 slaughtered in Gaza, but Ivanka all smiles at Jerusalem embassy unveil.”
The paper tweeted out its front page along with the caption “Deplorable.”