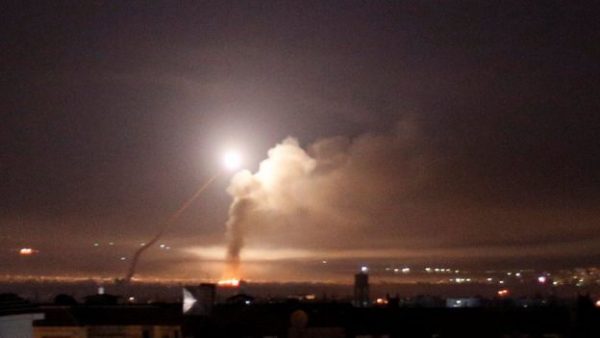 Israel said it attacked nearly all of Iran’s military infrastructure in Syria after the Iranian forces fired rockets at Israeli-held territory for the first time in the most extensive military exchange ever between the two adversaries.
Share:

Israel said it attacked nearly all of Iran’s military infrastructure in Syria on Thursday after Iranian forces fired rockets at Israeli-held territory for the first time in the most extensive military exchange ever between the two adversaries.

It was the heaviest Israeli barrage in Syria since the 2011 start of the civil war in which Iranians, allied Shi’ite Muslim militias and Russian troops have deployed in support of President Bashar al-Assad. The confrontation came two days after the United States announced its withdrawal, with Israel’s urging, from a nuclear accord with Iran.

The White House, in a statement, condemned Iran’s “provocative rocket attacks” from Syria and said it supported Israel’s right to defend itself.

“We are in the midst of a protracted battle and our policy is clear: We will not allow Iran to entrench itself militarily in Syria,” Netanyahu said in a brief video address.

Expectations of a regional flare-up, amid warnings from Israel that it was determined to prevent any Iranian military entrenchment in Syria, were stoked by U.S. President Donald Trump’s announcement on Tuesday about the withdrawal from the 2015 nuclear deal between Iran and world powers.

The United States portrayed its rejection of that agreement as a response, in part, to Iran’s military interventions in the Middle East, underpinning Netanyahu’s tough line towards Tehran.

Israel said 20 Iranian Grad and Fajr rockets were shot down by its Iron Dome air defense system or did not reach targets in the occupied Golan Heights, territory captured from Syria in a 1967 war. The Quds Force, an external arm of Iran’s Revolutionary Guards, carried out the rocket salvo, Israel said.

Iran and Israel were already drawing deeper into confrontation before Trump pulled the United States out of the deal, but his move has shaken up the region. Within Iran, it could empower hardliners while weakening the moderate camp that has sought better relations with the West.

‘EVERYONE GOT THE MESSAGE’

Israeli Defence Minister Avigdor Lieberman said the Iranian rockets either fell short of their targets – military bases in the Golan – or were intercepted.

“We hit … almost all of the Iranian infrastructure in Syria,” Lieberman said at the annual Herzliya security conference near Tel Aviv. “I hope we finished this chapter and everyone got the message.”

The White House said, “The Iranian regime’s deployment into Syria of offensive rocket and missile systems aimed at Israel is an unacceptable and highly dangerous development for the entire Middle East.”

The Syrian foreign ministry said the Israeli attack indicated “the start of a new phase of aggression” against Syria.

Thursday’s exchange followed a suspected Israeli rocket strike in Syria on Tuesday on a military base in Kisweh, hours after Trump’s announcement on the nuclear deal.

The Syrian Observatory for Human rights said 15 people, including eight Iranians, were killed in that attack. A commander in the pro-Syrian government regional alliance said there were no casualties. Israel, as it has typically done in similar incidents, neither confirmed nor denied a role.

France urged Iran on Thursday to refrain from all “military provocation” and cautioned it against “all temptations for regional hegemony”.

German Chancellor Angela Merkel condemned the overnight attacks by Iranian forces and called on Iran to contribute to de-escalation of tensions in the region.

Russia, generally friendly to Israel but fighting in Syria’s civil war on the same side as Iran, called on both to show restraint and resolve differences through diplomatic means.

Russia’s defense ministry said Syria had shot down more than half of the missiles fired by Israel, RIA news agency reported.

Conricus, the Israeli military spokesman, said the military focused on inflicting “long-term damage on the Iranian military establishment in Syria” and assessed “it will take a substantial time to replenish”.

The Israelis fear that Iran and its Lebanese ally Hezbollah are turning Syria into a new front against them. Israel says its occasional strikes in Syria aim to prevent such an outcome. Israel regards Iran as its biggest threat and has repeatedly targeted Iranian forces and allied militia in Syria.