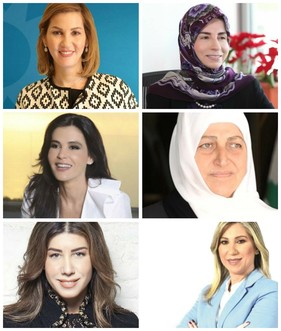 Lebanon’s new parliament will include six female lawmakers across the country, up from just four in the 2009-era parliament with several fresh faces.

The landmark May 6 election saw a record 86 women run, with virtually every party — except Hizbullah — putting forth female candidates.

Here is an overview of the women who scored a spot in Lebanon’s 128-member legislative body.

The high-profile television journalist landed a seat in the capital Beirut after running on a list of outsiders known as Kulluna Watani.

“This is the real change, the real opposition,” she told the AFP news agency during her campaign.

The 42-year-old daughter of an Armenian genocide survivor long hosted a show on Future TV, the channel owned by Prime Minister Saad Hariri, but she stepped down to run for office.

Yacoubian is the only candidate from outside the traditional political class to have won a seat.

Lawyer Roula Tabsh is also a first-time victor in the capital, but she ran on Hariri’s al-Mustaqbal Movement list which was otherwise dealt a blow at the polls.

Tabsh pledged to advocate for women’s rights in parliament, including making sure children with Lebanese mothers and foreign fathers can get Lebanese nationality.

The wins by Tabsh and Yacoubian will usher in the highest female representation in parliament ever for Beirut.

The sister of slain ex-premier Rafik Hariri and aunt of current prime minister Saad Hariri kept the seat she has held in the southern district of Sidon.

At 65, she has served as a member of parliament four times and as education minister, and was awarded a Legion d’Honneur by former French president Jacques Chirac in 2003.

She is a member of the prime minister’s inner circle.

Her life was turned upside down by her brother’s assassination in 2005. She stopped wearing skirt-suits and make-up and began covering her hair with a traditional white headscarf.

The 50-year-old politician from the northern district of Bsharri will return for another term in parliament.

She is married to Lebanese Forces chief Samir Geagea, and is credited with steering the party for 11 years while he was detained during Syria’s military occupation of Lebanon, until his release in 2005.

The tall, slender woman is seen as a hardliner within the movement.

A pathologist by training, 57-year-old Ezzeddine has served as minister for administrative reform — but her rise to parliament is unprecedented.

It will be her first term as a legislator, but also the first time Lebanon’s port city of Tyre has a female representative. Ezzeddine hails from the AMAL Movement, a strong Shiite party that is allied to Hizbullah and has never put forward a female candidate.

Ezzeddine is divorced and is a mother of two daughters.

Jamali is a professor of business management and freshman parliamentarian, who will serve in Lebanon’s second city Tripoli after running on al-Mustaqbal Movement’s list.

Her father was the mayor of the coastal metropolis in the north, but it has never before been represented by a woman.

“We have a historic opportunity to bring new faces to Tripoli,” she said in a campaign video before the vote.

Among those that did not win seats are Joumana Haddad, a writer and activist who ran in Beirut, and an all-women’s list from the conservative northern area of Akkar.

But Lebanese women flooded the polling stations on Sunday, both as voters and party delegates. Females made up 50.8 percent of registered voters in 2018, according to the United Nations.