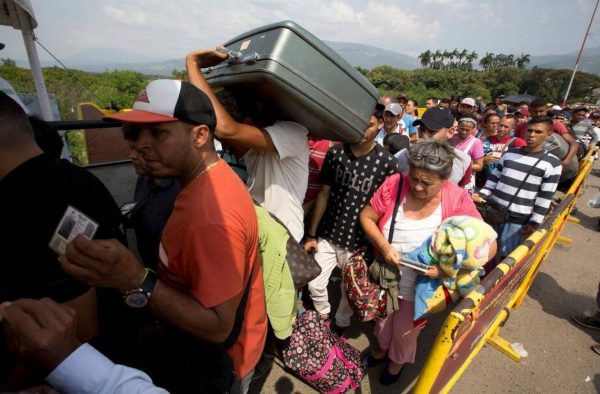 The Brazilian Air Force has begun flying Venezuelans from a remote border region to elsewhere in Brazil, trying to defuse a humanitarian crisis as tens of thousands of migrants flee an economic collapse in their country.

On Friday, 233 Venezuelans boarded a Boeing 767 on a sun-drenched tarmac bound for the cities of Manaus and Sao Paulo — the third flight in a month aimed at easing pressure on social services in northern Brazil.

Brazil’s government launched the Army-led operation in March with a budget of 190 million reais ($54 million) to control the flow of migrants, improve their temporary shelters and help with documents so they can move onward to find work in larger cities.

The waves of Venezuelans driven by hunger and hardship have continued unabated, however, with hundreds of migrants entering Brazil each day at the only formal land crossing between the two nations, according to officials in the border state of Roraima.

In the state capital of Boa Vista, some 1,500 refugees have taken refuge in a square named after Venezuelan independence hero Simon Bolivar, braving tropical downpours in a crowded tent city with no water, toilets or cooking facilities.

“New steps are being taken to alleviate the situation, but the humanitarian crisis continues,” said Rosilene Santiago, superintendent for federal police in Roraima. “Just look at the number of Venezuelans seeking work on the streets of Boa Vista.”

Federal Police said 92,656 Venezuelans entered Brazil between 2017 and 2018. Half of them have continued onward to neighboring Spanish-speaking countries such as Argentina and Chile, but many have stayed in Boa Vista.

General Eduardo Pazuello, who is coordinating the operation with the United Nations High Commission on Refugees (UNHCR), said up to 7,000 Venezuelans still need assistance in Boa Vista.

UNHCR representative Isabel Marquez said the processing of refugees had improved since the army got involved, but warned the crisis is not over and the flow of migrants could grow.

“The situation in Venezuela is not getting any better. It is deteriorating in many aspects. People are not getting food and not everyone has access to what little there is,” Marquez said.

Venezuelans have saturated the job market in Boa Vista and new arrivals are finding it hard to find work. Juan Roca, formerly a fork lift driver at Venezuelan state oil company PDVSA, has been sleeping on the streets for a month, living on rice and beans cooked on a fire.

“Look how thin I am. There is no work here,” he said, as he waited for a room in a shelter and a flight to a bigger city.

According to the United Nations, nearly one million people left Venezuela between 2015 and 2017, fleeing an economic crisis and what critics call an increasingly authoritarian government. The trend appears to have accelerated this year.

Evelin Garcia, who held a crying 10-month-old son in her arms before boarding the Air Force flight to Manaus, was happy to leave Boa Vista after four months in a UNHCR tent with her four children.

The lack of food and medicine in Venezuela led her to follow her husband José Gregorio Sucre, a bricklayer who traveled first to Brazil seeking work.

“We’re excited to be here, but I’m scared. I’ve never flown on a plane before,” she said. “We don’t know what awaits us … But until the government changes and things improve, I’m not going back.”