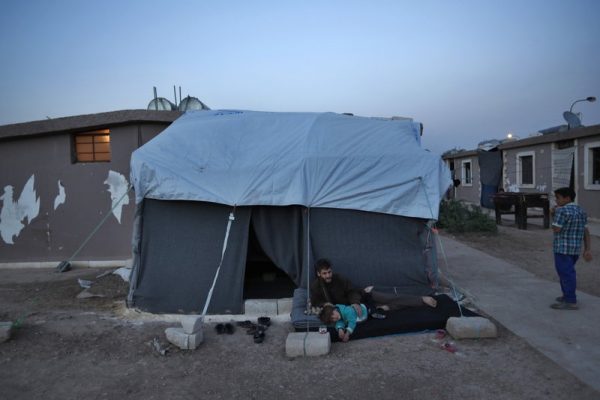 In this Friday, April 13, 2018 photo, a man who was displaced with his family from eastern Ghouta receives a haircut at a roadside makeshift barbershop at a displaced shelter, in the village of Horjelli in the Damascus countryside, Syria. Thousands of Syrians displaced by the battle for the once-lush suburbs of Damascus now find themselves in a crowded settlement, where for the first time in recent memory they have enough to eat. The community is home to some 18,000 people displaced by the offensive that drove rebels out of eastern Ghouta. On Saturday, the Syrian government announced the capture of Douma, the last rebel stronghold in eastern Ghouta and the site of an alleged chemical attack that prompted a Western missile strike. (AP Photo/Hassan Ammar)
Share:

HORJELLI, Syria – Thousands of Syrians displaced by the battle for the once-lush suburbs of Damascus now find themselves in a crowded settlement, where for the first time in recent memory they have enough to eat.

The rows of pre-fabricated shelters are home to some 18,000 people displaced by the offensive that drove rebels out of eastern Ghouta. On Saturday, the Syrian government announced the capture of Douma, the last rebel holdout in eastern Ghouta and the site of an alleged chemical attack that prompted a Western missile strike.

Government forces had laid siege to eastern Ghouta since 2013, and late last year they tightened the noose, causing food prices to soar in the farming region that once served as a breadbasket for the capital. The manipulation of the local market by rebel groups and local businessmen made matters worse. Residents say a day’s work would barely bring in enough money for a kilogram (2.2 pounds) of rice or a few pieces of bread.

Alia Bakkar sold all her belongings so that she and her three children could survive. The 35-year-old widow described how they used to walk by restaurants in their town of Kfar Batna, smelling grilled chicken and beef without being able to afford it. After selling all their belongings and running out of money, the family survived on small amounts of barley bread.

They are now living with other displaced people in the cramped settlement in Horjelli, where there are no paved roads and sewage pours into a canal. Mayor Abdul-Rahman al-Khatib said the settlement was originally established to host Syrian refugees returning from neighboring countries. Now it’s been filled by the latest wave of displacement in the seven-year-old civil war.

The Syrian Observatory for Human Rights, a Britain-based group that closely monitors the conflict, says 177,000 people have fled eastern Ghouta since February, with 108,000 going to government-held areas, most in shelters. The rest — including about 12,000 fighters — relocating to the northern rebel-held Idlib province.

Many had their houses destroyed during the massive government offensive in February and March, when Syrian and Russian warplanes pounded the towns of eastern Ghouta, forcing residents to shelter underground.

Now the displaced are packing into housing units in which more than 20 people share two rooms, a bathroom and a kitchen.

Many are ill. More than a dozen people were lined up last week awaiting treatment at an aid station set up by the Syrian Arab Red Crescent. Paramedics say they treat between 800 and 1,000 patients a day, mainly for fever and diarrhea.

A collective kitchen cooks up three tons of food every day, distributing it to residents who line up with their own pots. On a recent day they received rice and lentils cooked in gravy as well as french fries, tomatoes and cucumbers.

“We work about 18 hours a day, starting early in the morning,” said Ziad Ghazal, a 43-year-old volunteer who was displaced from eastern Ghouta.

The food, as well as blankets, mattresses and medicine, is supplied by the Syrian government, the U.N. and local organizations.

Many residents blame the rebels for their plight and express support for the government. But that might be because they fear repercussions now that they are living in a government-held area and relying on local authorities for food and shelter.

Asma Mohammed says she once had to grind animal feed and make bread out of it to feed her three-year-old son. Having spent his entire young life in conditions of deprivation, he doesn’t fully comprehend what it means to have three meals a day.

When they first arrived, he ate half a piece of flatbread and then asked her to hide the other half.

“I told him there is no need to hide food. It’s available now,” she said. But he still put the bread in her pocket, just in case.