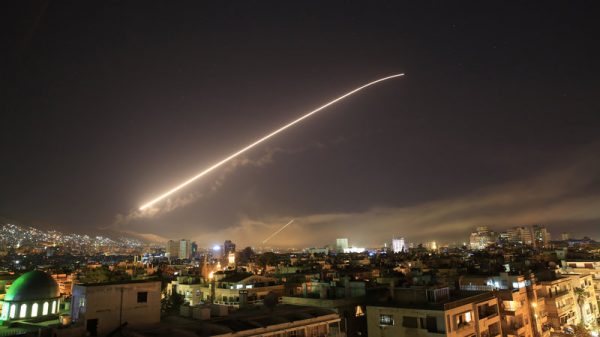 The U.S., Britain and France carried out airstrikes early Saturday against three sites in Syria in response to a suspected chemical weapons attack last week by President Bashar Assad’s regime.

“We are prepared to sustain this response until the Syrian regime stops its use of prohibited chemical agents,” President Trump said in televised remarks from the White House.

One site was a science research facility in Damascus, the Syrian capital, where residents said loud explosions rang out.

The other two were production and storage facilities around Homs, a city to the north of Damascus.

There were no immediate reports on casualties or the extent of the damage. The Pentagon said it would provide a more detailed assessment on Saturday morning.

The sites were chosen to minimize civilian loss of life and possible release of chemical agents, the Pentagon officials said. Mattis said the number of weapons used was about double those used in a strike in April 2017. In that case, 59 Tomahawk missiles were fired at a Syrian airbase in the western part of the country following a chemical attack blamed on Assad’s forces.

“Right now we have no additional attacks planned,” Mattis said.

The U.S. has about 2,000 troops in northeastern Syria, where they have partnered with Kurdish fighters to dismantle the Islamic State. With the extremist group largely defeated, the president says he supports the withdrawal of U.S. forces.

“America does not seek an indefinite presence in Syria,” he said. “The United States will be a partner and a friend. But the fate of the region lies in the hands of its own people.”

U.S. military officials have said they believe the American forces should remain a while longer to help stabilize the places where ISIS was pushed out.

Trump, meanwhile, also addressed the governments of Iran and Russia, both of which support Assad.

“I ask what kind of a nation wants to be associated with the mass murder of innocent men, women and children,” Trump said. “The nations of the world can be judged by the friends they keep. No nation can succeed in the long run by promoting rogue states, brutal tyrants and murderous dictators.”

Referring to Assad, Trump said, “These are not the actions of a man. They are crimes of a monster instead.”

The suspected chemical attack occurred on April 7 in the Damascus suburb of Douma, which had been held by rebel forces for years in Syria’s continuing civil war. Civilians and rebel forces abandoned Douma following the latest attack.

In the days leading up to the U.S. attack, Russia had warned that it would defend its troops in Syria. This has raised fears of a possible direct clash of U.S. and Russian forces.

The U.S. strike comes almost exactly a year after a previous U.S. strike, which was also in response to the Syrian regime’s alleged use of chemical weapons.

However, over the past year, Assad’s regime has improved its position in much of the country as it battles various rebel groups. His government controls most of the major cities, which are located in the western part of the country.