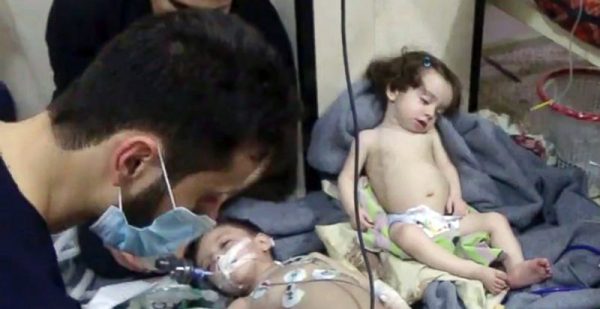 China said on Monday that it supports an investigation into a suspected chemical attack on the Syrian rebel-held town of Douma that has provoked global outrage. US President Donald Trump and French counterpart Emmanuel Macron have vowed a strong response to the suspected poison gas attack, which left dozens dead
Share:

After President Donald Trump warned Russia in a tweet Wednesday that it should “get ready” for missile strikes against Syria, key lawmakers on Capitol Hill questioned whether threats of war should be made via social media while some Republican defense hawks urged Trump to act soon.

The President signaled in a morning tweet that the US would fire missiles into Syria: “Russia vows to shoot down any and all missiles fired at Syria. Get ready Russia, because they will be coming, nice and new and “smart!” You shouldn’t be partners with a Gas Killing Animal who kills his people and enjoys it!”

GOP Sen. Bob Corker of Tennessee, who chairs the influential Foreign Relations Committee, questioned the value of Trump’s tweet and warned the inflammatory rhetoric could escalate the crisis into a “geopolitical outbreak.”
Corker has called for “surgical strikes” against Syria to punish President Bashar al-Assad’s government for allegedly carrying out a chemical attack against Syrian civilians last week.

“The only thing I worry about is that it’s not going to happen,” he said about a possible military response. “Because so many things get announced and then they never happened. I’m actually more concerned on the other side and I think every day that goes by, we actually get ourselves more fully in position where it could create a geopolitical outbreak whereas if we had just done it, before the Russians and the Iranians, and the Syrians prepped for it, we’d been in much better shape.”

Russia vows to shoot down any and all missiles fired at Syria. Get ready Russia, because they will be coming, nice and new and “smart!” You shouldn’t be partners with a Gas Killing Animal who kills his people and enjoys it!

He continued: “Now we’re announcing what we’re going to do and unfortunately it puts us in a place where possibly it creates a greater conflict.”

Even as Trump appeared to announce a decision to launch strikes, White House officials said no final plans had been made.
Trump has consulted allies in Europe to arrange a coordinated effort, and was planning to meet with top military leaders on Wednesday afternoon.

Sen. John Cornyn of Texas, the No. 2 Republican in the Senate, welcomed Trump’s consideration of “retaliatory action” even as he called the President’s tweet “unconventional.”

“Well, I am glad he is considering retaliatory action. Because we have seen that red lines that go unenforced just encourage further provocative action by Assad,” he told reporters in the Capitol on Wednesday. “So it is unconventional, to be sure. Something I doubt any other president would have done. I don’t think it caused any harm because I know Assad and Russians are expecting something to happen.”

Asked how Trump should respond to the alleged Syrian chemical attack, Sen. Jim Inhofe, an Oklahoma Republican, said the US should “go over and bomb.”

“I’d be disappointed if he didn’t,” said Inhofe, who is a senior member of the Armed Services Committee. “Let’s remember what happened a year ago, and that was very effective and he if loses the reputation we lost for eight years under Obama, we’re going to lose that position as leader of the free world. I really believe that. So he needs to take action.”

Meanwhile, Democratic Sen. Chris Murphy of Connecticut warned that an attack wouldn’t help end the civil war in Syria and said Trump must seek approval from Congress before attacking Syria.

“Trump seems to have signaled there’s going to be another military attack — that’s not permissible by law,” said Murphy, who sits on the Foreign Relations Committee. “I think a military attack will help him feel good but I don’t think it will actually change the calculus on the ground. It might make things much worse.”