Russia warns US against military action over Syria ‘chemical atatck 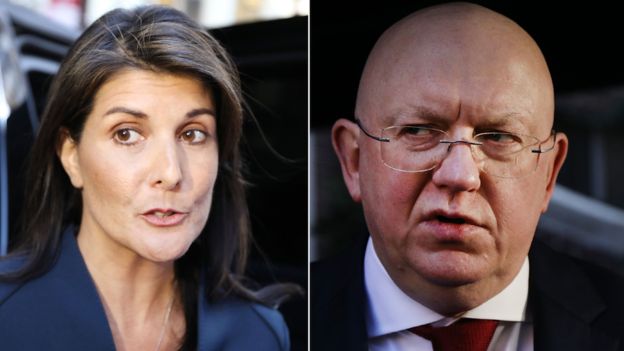 Russia has urged the US to avoid taking military action in response to an alleged chemical attack in Syria.

“I would once again beseech you to refrain from the plans that you’re currently developing,” Moscow’s UN envoy Vasily Nebenzia said on Tuesday.

He warned Washington that it will “bear responsibility” for any “illegal military adventure” it carries out.

But Western leaders say they have agreed to work together to target those responsible for the attack in Douma.

The warning from Moscow came during a divided meeting of the UN Security Council in which a proposal to open a new inquiry into the alleged attack failed to pass.

The US proposal called for an independent investigation into claims that Syrian President Bashar al-Assad’s regime carried out the suspected chemical attack on the rebel-held town of Douma, in the Eastern Ghouta region.

Syria – which receives military backing from Russia – denies being behind any chemical attack.

A team from the Organisation for the Prohibition of Chemical Weapons (OPCW) is due to deploy to Syria “shortly” to determine whether banned waepons were used in Douma.

But the OPCW will not seek to establish who was responsible for the attack.

The UN session was the latest in a series of showdowns between Russia and the US and saw harsh words exchanged between the countries.

Mr Nebenzia accused the US of “planting this resolution” as a “pretext” to justify military action.

“We could find ourselves on the threshold of some very sad and serious events,” he said.

US envoy Nikki Haley responded by calling the vote a “travesty”.

“Russia has trashed the credibility of the council,” she said.

Will there be a military strike?

US President Donald Trump has promised a “forceful” response, and has spoken of numerous military options.

He cancelled his first official trip to Latin America to focus on Syria. His Defence Secretary, James Mattis, has also cancelled travel plans.

Mr Trump’s decision to cancel his Latin America trip suggests the US response may involve a larger military operation than a limited strike, says the BBC’s Barbara Plett Usher in Washington.

Last April, after a Sarin nerve agent attack killed more than 80 people in a Syrian opposition-held town, Mr Trump ordered the firing of dozens of cruise missiles at a Syrian government air base from US Navy ships in the Mediterranean.

It was the first direct US military action against forces commanded by President Assad.

Since Saturday’s incident, Washington has been in discussion with Britain and France, raising the prospect of co-ordinated Western military action.

A US Navy guided-missile destroyer, the USS Donald Cook, is in the Mediterranean.

What happened on Saturday?

Syrian opposition activists, rescue workers and medics allege that bombs filled with toxic chemicals were dropped on Douma, in the Eastern Ghouta region, near the capital Damascus, by Syrian government forces.

The Syrian-American Medical Society said more than 500 people were brought to medical centres with symptoms “indicative of exposure to a chemical agent”.

The estimates of how many people died in the suspected chemical attack range from 42 to more than 60 people, but medical groups say numbers could rise as rescue workers gain access to basements where hundreds of families had sought refuge from bombing.

The French representative at the UN Security Council said poison gas had deliberately been used as it could seep down to the basements.

Following the alleged attack, Syria and Russia reached an evacuation deal with the Jaish al-Islam rebels, who up until now have been holding Douma.