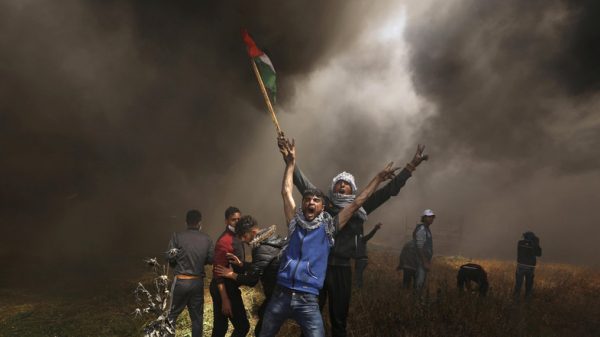 Palestinian demonstrators shout during clashes with Israeli troops at a protest demanding the right to return to their homeland, at the Israel-Gaza border east of Gaza City April 6, 2018. REUTERS/Mohammed Salem – RC11138C7B90
Share:

Israeli troops shot dead seven Palestinian protesters and wounded at least 200 along the Israel-Gaza border on Friday, Gaza medical officials said, raising the death toll to 27 in the week-long disturbances.

They said the demonstrators, including two teenage boys aged 16 and 17, were killed at protest sites along the frontier during a round of daily demonstrations that has been dubbed “The Great March of Return”.

The day of violence, which saw bigger Palestinian crowds than in recent days but not as large as when the demonstration began last Friday, calmed down as night descended.

Gazans, including Palestinian refugees and their descendants seeking to regain ancestral homes in what is now Israel, have set up tent encampments a few hundred meters (yards) inside the 65-km (40-mile) fence that separates Israel from the Gaza Strip.

Large groups of youths have ventured much closer to the no-go zone along the barrier, risking live fire from Israeli troops to roll burning tires and throw stones.

“Israel took everything from us, the homeland, freedom, our future,” said Samer, a 27-year-old protester who would not give his full name, fearing Israeli reprisals. “I have two kids, a boy and a girl, and if I die, God will take care of them.”

The number of protesters on Friday was larger than in recent days, but lower than the outset of the disturbances on March 30, when 17 Palestinians were fatally shot by Israeli forces. The Israeli military estimated Friday’s turnout at around 20,000.

Refugees comprise most of the 2 million population of Israeli-blockaded Gaza, an enclave ruled by the Islamist movement Hamas which calls for Israel’s destruction and is designated by Western states as a terrorist organization.

Many of those killed were militants, said Israel, which stationed sharpshooters on the frontier to stop Palestinians attempting “any breach of the security infrastructure and fence, which protects Israeli civilians”.

David Keyes, an Israeli government spokesman, accused Hamas of having instigated violent protests along the border.

Hamas’s Gaza leader, Yehya Al-Sinwar, spoke at a protest encampment to praise those who turned out to confront the “enemy who besieges us”. He said the demonstrations would continue, telling the crowds: “We will uproot the borders, we will pluck out their hearts, and we will pray in Jerusalem.”

Earlier, Hamas spokesman Hazem Qassem urged protesters to keep the rallies peaceful. “Maintaining the peaceful nature of the protests will strike all fragile Zionist propaganda,” Qassem said in a statement.

Palestinian President Mahmoud Abbas, who holds little sway in Gaza, condemned what he described as Israel’s “acts of killing and oppression conducted…against the peaceful uprising.”

Israel’s response to the protests has drawn international criticism, with human rights groups saying it involved live fire against demonstrators posing no immediate threat to life.

The demonstrators have revived a longstanding demand for the right of return of Palestinian refugees to towns and villages which their families fled from, or were driven out of, when the state of Israel was created.

The Israeli government has ruled out any right of return, fearing that the country would lose its Jewish majority

A Palestinian protects himself from inhaling tear gas at the Israel-Gaza border during a protest demanding the right to return to their homeland, in the southern Gaza Strip April 6, 2018. REUTERS/Ibraheem Abu Mustafa

Palestinian youths burned Israeli flags and planted Palestinian banners on dirt mounds beside tented encampments as others arrived on large trucks carrying piles of more tires to burn. Others launched stones with slingshots.

With Israeli tear gas rising into the air, Palestinian youths used T-shirts, cheap medical masks and perfume to try and protect themselves. Israel tried to douse the burning rubber with jets of water directed over defensive dirt mounds on its side of the border.

A U.N. human rights spokeswoman urged Israel to exercise restraint against the Palestinian protesters. “We are saying that Israel has obligations to ensure that excessive force is not employed. And that if there is unjustified and unlawful recourse to firearms, resulting in death, that may amount to a wilful killing,” Elizabeth Throssell said in Geneva.

Israel says it is doing what it must to defend its border and that its troops have been responding with riot dispersal means and fire “in accordance with the rules of engagement”.

The Palestinian deaths have elicited scant concern in Israel, which has been the target of thousands of rocket strikes from Gaza over the past few years.

Palestinian militant groups have also dug tunnels under the border fence to smuggle weapons, and to launch attacks.
REUTERS
Share: