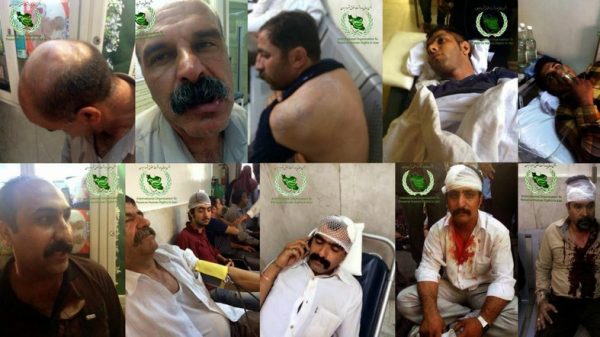 “One of the men, Abbas Dehghan, has allegedly been threatened with his wife being raped in front of him if he does not ‘confess’,” the rights group said in a statement.

Amnesty said the eight hunger strikers require medical care for injuries sustained during their arrest in the violent clashes with security forces on 19 February.

The violence erupted during a demonstration by members of the Gonabadi order, known as dervishes, who were protesting the arrest of members of the sect, as well as rumors that their leader would soon be arrested.

One member of the sect has been sentenced to death for driving a bus into a group of police officers during the protests, killing three.

Two members of the Basij, an Islamic militia tasked with a number of policing duties, were also killed in the clashes.

The men on hunger strike are being held in Shapour detention center in Tehran, Amnesty said, describing it as “notorious for extracting ‘confessions’ through torture”.

“Commonly reported methods of torture include kicking and punching; beatings with plastic pipes, cables or whips; prolonged binding; and various forms of suspension including one known as the ‘chicken kebab’, in which the person is suspended from a pole with their arms bent back and tied to their ankles and then flogged,” the group said.

More than 300 people were arrested in the February clashes.

Amnesty said some families were not informed of their whereabouts and the authorities have been denied access to lawyers until their interrogations are complete.

At least 20 members of the sect have been charged so far, Amnesty said, with more charges expected.

It said one protester had died from injuries to his head, which police say were received during the clashes. The family told Amnesty it took two weeks for them to be informed of his death.

A mystic branch of Islam, Sufism is tolerated in Iran but perceived as a “deviation” by many conservative members of the Shiite clergy.

Emerging in the nineteenth century, the Gonabadi order is one of the most important Sufi branches in Iran.

Its followers regularly complain of being harassed by authorities and discriminated against by the Islamic Republic.

The Iranian regime holds a religious doctrine based on its own reading of Shi’ism, which calls for the acceptance of the ruling and pledging allegiance to the Wali al-Faqih who has the duty to apply the sharia. Therefore, the Sufis who reject the interference of religion in politics pose a danger to the Wilayat al-Faqih known in English as the Guardianship of the Islamic Jurist.