The Rise of Dictatorship Incorporated 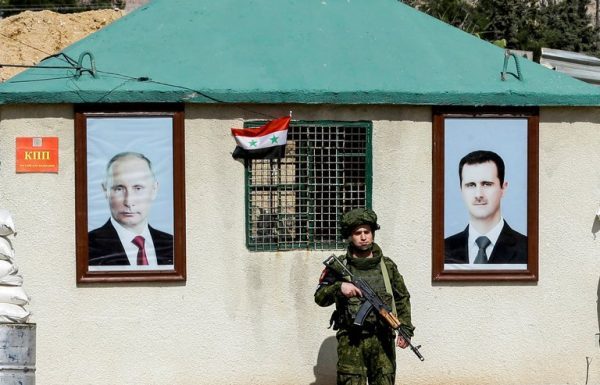 A member of the Russian military police stood guard between portraits of President Bashar al-Assad of Syria, right, and President Vladimir Putin of Russia outside a post on the outskirts of Damascus. CreditLouai Beshara/Agence France-Presse — Getty Images
Share:

It really is an axis of evil.

This week, The Times reported that United Nations investigators have compiled a more-than-200-page dossier containing extensive evidence of North Korea’s supply of potential chemical weapons components and ballistic missile parts to Bashar al-Assad’s regime in Syria. Pyongyang had previously tried to furnish Assad with a nuclear reactor, until the Israelis destroyed it in a 2007 airstrike.

Pyongyang isn’t Damascus’s only helper. Last November, Moscow — which supplies Assad with an air force to bombard his own people — wielded its 10th and 11th vetoes in defense of the Syrian government at the U.N. Security Council to scupper a separate panel of experts charged with investigating the use of chemical weapons in Syria. Beijing has used its own veto to help Assad on six occasions.

Then there’s Iran, which has been invested in Assad’s survival from the beginning of the uprising against him in 2011. Through Hezbollah, its Lebanese proxy, Tehran has provided Assad with his most effective and merciless ground troops.

Why should a Shiite theocrat, a Russian kleptocrat, a Korean gourmand and a Chinese son of heaven unite so openly to rescue a foul and feeble Baathist dictatorship?

The question isn’t asked often enough. None of them shares a border, a language, a religion, or a political ideology with Assad. And each has paid a price for meddling.

Iran has lost some 500 troops, including at least 16 generals, fighting in Syria since 2012, according to the Atlantic Council’s Ali Alfoneh, while suffering a popular backlash back home against its Syria policy. Russia may have lost dozens of its mercenaries in a humiliating recent encounter with American forces near the Euphrates. And whatever else Kim Jong-un is doing in Syria, he probably isn’t getting rich from the trade.

Then again, there are interests that go beyond lives and money. Some of these are relatively narrow. Iran wants to maintain the so-called Shiite crescent. Russia hopes to use its position in Syria to bargain for concessions over Ukraine. China wants to rebuild Syria when it’s all over. North Korea is just sinister.

But there is also the collective interest of Dictatorship Inc.

Interest No. 1: To see a popular rebellion against tyranny fail spectacularly.

This is fundamental. Syria isn’t so much a country as it is an exhibit for Dictatorship Inc., the main purpose of which is to show that resistance really is futile. That’s why Russia doesn’t shrink from bombing civilian hospitals, or Hezbollah from starving entire cities into submission, or Assad from using chemical weapons. They are showing their respective publics the lengths to which they are prepared to go to maintain their own grip on power.

Interest No. 2: To underscore America’s unreliability as a credible ally and serious enforcer of global norms.

Whatever their differences, Iran, North Korea, Russia and China are all so-called revisionist powers. What they want to revise, or erase, is Pax Americana. In Syria, they had an ally, a cause and a plausible outcome. America, by contrast, only had the bonfire of its ambivalence. The result, beyond the humanitarian catastrophe, has been a reputational catastrophe, as the U.S. demonstrated that it would not back its local allies, or seriously enforce norms against the use of chemical weapons, or devise and implement a strategy compatible with our stated policy.

Whatever else one might say about American regional interests or moral obligations when it comes to Syria, we have a vital national interest in foiling Dictatorship Inc.’s ambitions for the country.

We could do something to reverse our reputation for unreliability by doing more to protect our Kurdish allies against their enemies — including the Turks — much as we did after the 1991 Persian Gulf war. We could erase the stain of the breached red line by striking Assad’s military installations every time Syria uses chemical weapons. We could find covert ways to dramatically increase the military price Russia is paying for its intervention.

And we could do all this, without burdening ourselves as we did in Iraq, with the task of sorting out Syria’s future.

That requires an administration capable of devising, coordinating and executing a consistent military and diplomatic strategy. We don’t have one.

It requires a president who understands the benefits of Pax Americana, doesn’t think of foreign policy as a series of gimmes, is capable of rallying allies to a common cause, and understands that our liberal values are the great prerequisite for our global leadership. We don’t have one.