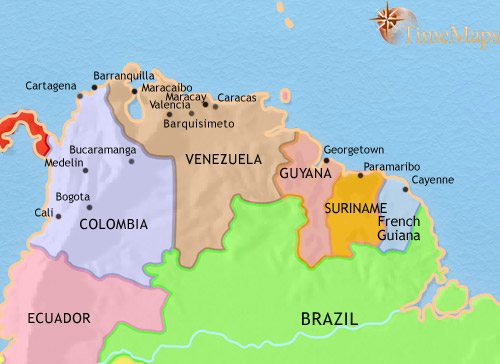 CUCUTA, Colombia/BRASILIA – Colombia and Brazil tightened border controls with Venezuela on Thursday as both nations grapple with a mounting influx of hundreds of thousands of desperate migrants fleeing a worsening economic crisis.

Speaking in Cucuta, a Colombian border city of about 670,000 inhabitants, Santos warned that his government would strictly prosecute any unlawful behavior by Venezuelans, amid concerns over rising crime. He said Colombia was spending millions of dollars to support the migrants.

Brazil’s Defense Minister Raul Jungmann, speaking in the northern border town of Boa Vista, said the government would also deploy more troops and start relocating tens of thousands of Venezuelan refugees who have crossed the open frontier to seek food, work and shelter.

Both countries said they would take measures to count the number of Venezuelan migrants who have entered their territory: Brazil through a census and Colombia through a registry.

The moves to tighten border security could threaten a key social safety valve for desperate Venezuelans as hyperinflation and a severe recession grip their oil-rich country.

The steps also signaled a mounting regional frustration with Venezuela’s unpopular President Nicolas Maduro, who will seek re-election on April 22 amid conditions that the United States and other countries say are stacked against a divided opposition.

Maduro is expected to win reelection despite a recession that is now in its fifth year.

“I want to repeat to President Maduro – this is the result of your policies, it is not the fault of Colombians and it’s the result of your refusal to receive humanitarian aid which has been offered in every way, not just from Colombia but from the international community,” Santos said.

Venezuelan government officials did not return requests for comment, and Maduro steered clear of the topic during a late afternoon speech.

On Thursday, the United States condemned the Venezuelan government’s decision this week to set a date for the presidential election in the absence of guarantees that it will be free and fair.

The move came after the collapse of mediation talks in the Dominican Republic between Maduro’s government and an opposition coalition.

The opposition had lobbied for the elections to be delayed until later in the year to give it more time to choose a candidate, since its top two leaders are barred from running.

Members of the so-called Lima Group monitoring the crisis in Venezuela, which includes several Latin American nations and Canada, were due to meet in Peru next week to craft a response to Maduro’s decision to press ahead with the vote.

Colombia has born the brunt of the exodus of Venezuelans fleeing malnutrition and political turmoil in their once prosperous nation: the number living within its borders jumped by 62 percent in the second half of last year to more than 550,000.

In Brazil’s northern border region of Roraima, migrants have strained public services and stirred anger among some residents, particularly in Boa Vista, the local capital.

In a sign of growing resentment in the city of 300,000 inhabitants, two gasoline bombs were thrown through open windows into houses where migrants were sleeping early on Thursday, authorities said.

The attack caused second degree burns to a 3-year-old girl and injured her parents. It followed a similar attack in the same neighborhood on Monday in which a woman was burned.

Santos, who has repeatedly clashed with Maduro over the migration issue, urged his countrymen to avoid hostility toward their neighbors.

“The problem of the Venezuelan migrants has been growing. It’s a complex problem; a problem that we are not used to,” Santos said during his visit to an aid warehouse, surrounded by ministers and local officials.

Colombia estimates that it costs $5 per day to supply each Venezuelan migrant with food and lodging. The government did not say how many migrants it was supporting.

While Venezuelan professionals such as doctors and engineers have found work in Colombia’s big cities or its oil industry, the bulk of the poor have settled in border towns.

“It’s good Juan Manuel is coming to see the calamity of the border, because on the Venezuelan side we’re dying of hunger and can’t get medicine,” said Venezuelan Carmen Garcia, a 55-year-old vegetable seller, referring to the Colombian president.

“I ask the Colombian president to keep receiving us and not close the border.”