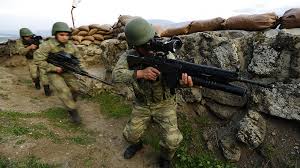 A deadly attack carried out by Iranian militias on Turkish troops deep inside Syria has cast renewed doubt on the survival of a de-escalation agreement meant to ease tensions between three of the main powers enmeshed in the long-running conflict.
The assault on the outpost in Idlib province, southwest of Aleppo city, on Monday night killed one Turkish soldier and injured five others. The Turkish military retaliated with rocket fire, but experts have told Arab News that the bloodshed could be a sign of further trouble to come.
Last year officials from Ankara, Tehran and Moscow agreed to set up a series of de-escalation zones in Syria that were supposed to reduce violence between anti-government insurgents and forces fighting in support of Syrian President Bashar Assad.
The UN backed the move but all three countries remain deeply involved in the conflict and Monday night’s attack was just the latest indication that their detente is in danger of collapsing into a new wave of violence.
Huseyin Bagci, a professor of international relations at Ankara’s Middle East Technical University, said the deal — struck in Kazakhstan’s capital Astana — was “still valid” but “the three guarantor countries should immediately meet and discuss the ongoing problems with each other.”
He anticipated more clashes between Iran’s proxy forces and Turkish troops in the coming weeks, as both powers seek to exert their influence over Idlib — a province controlled by the former Al-Qaeda affiliate group Hayat Tahrir Al-Sham.
The outpost that was attacked on Monday had only been established that morning. It is the fourth observation point the Turkish military has set up in Idlib, with a further eight still due to be built under the terms of the Astana deal, but its construction came at a particularly delicate time.
On Jan. 20, the Turkish military launched Operation Olive Branch against Kurdish fighters belonging to militias including the People’s Protection Units (YPG) stationed in the nearby Syrian district of Afrin. Ankara has since portrayed the offensive as a successful attempt to root out separatists threatening its sovereignty but Damascus fears Turkish troops are moving deeper into Syrian territory in an attempt to establish a permanent presence in the country.
The Syrian civil war has turned into a battleground for regional and international powers since it first began with a wave of civil unrest against the Assad regime in 2011. The regime responded to the peaceful protests in brutal fashion, arresting and killing thousands of its opponents and deliberately stoking the flames of an Islamist insurgency.
Under the guise of fighting terrorism and protecting one of its main allies, Iran has become increasingly involved in the war. There was further evidence of this close relationship after Monday night’s attack, with the Syrian army yesterday (Tuesday) deploying anti-aircraft missiles to the front lines in Aleppo and Idlib in an apparent warning to Ankara not to retaliate further.
Tehran has also urged Turkey to stop its military offensive against the Kurdish separatists, accusing it of breaching Syrian sovereignty and destabilizing the region.
Meanwhile, Russia still finds itself mired in the conflict almost three years after first launching airstrikes against opposition groups fighting the Assad regime. Last Saturday, one of its pilots blew himself up with a grenade to avoid being captured by insurgents after his plane was shot down over Idlib.
Timur Akhmetov, a researcher at the Moscow-backed Russian International Affairs Council, told Arab News that the latest clash between Turkey and Iranian-sponsored militias might yet develop into a major new fault-line in the war.
“It would not be unrealistic to expect confrontation between Turkey-backed groups and pro-Assad forces in the coming days. The decisive factor, however, will be the absence of Russian air support in any offensives against Turkish interests,” he said.