(GENEVA) — The U.N. human rights office said Wednesday that 206 companies — mostly Israeli and American — are facing a review of their business practices involving Israeli settlements, which are considered illegal under international law.

In a long-awaited report, the office said more resources were needed to handle the complex and unprecedented task of compiling what some critics call an unfair “blacklist” and a sign of anti-Israel bias at the U.N.

Proponents insist that companies must be held accountable for their activities in the settlements, arguing that those actions can contribute to injustices against Palestinians.

The governments of both Israel and the United States criticized the U.N. effort.

The 16-page report, which does not cite companies by name, said the rights office still has work to do.

The office said it had contacted 64 companies, but it would not identify any until all 206 companies had been contacted — and possibly not at all. Of those companies, 143 are based in Israel or the settlements and 22 in the United States. Of the 19 other countries linked to such companies, Germany is home to seven and the Netherlands to five.

Ultimately, the rights office’s review could lead to a public naming and shaming of companies for their activities linked to the settlements and give an U.N. imprimatur to efforts championed by the “BDS” movement (boycott, divest and sanction), which has been primarily a grassroots campaign to pressure Israel through action against companies.

“The violations of human rights associated with the settlements are pervasive and devastating, reaching every facet of Palestinian life,” the report said, citing restrictions on movement, freedom of religion, education and land ownership faced by Palestinians in east Jerusalem and the West Bank. “Businesses play a central role in furthering the establishment, maintenance and expansion of Israeli settlements.”

“Business enterprises may need to consider whether it is possible to engage in such an environment in a manner that respects human rights,” it said.

Some 115 other companies were eliminated after an initial review.

Israel and the United States have been sharply critical of a resolution passed by the 47-member Human Rights Council in March 2016 that paved the way for the review — the first of its kind. The resolution called on the rights office to create “database” of companies found to engage in any of 10 activities, either explicitly linked to the settlements or supportive of them.

“I urge all sides to avoid misrepresenting the contents of this report, which has been produced in good faith on the basis of the mandate laid down by the Human Rights Council,” said Zeid Ra’ad al-Hussein, the U.N. High Commissioner for Human Rights. He said he hopes the database “will assist states and businesses in complying with their obligations and responsibilities under international law.”

Israeli officials vowed to fight what they called a “blacklist,” with Israel’s ambassador saying the whole review process pointed to the council’s “moral bankruptcy” and alleged slant against the Jewish state.

“We view the report, and the initiative as a whole, as fundamentally illegitimate,” said Aviva Raz Shechter, the Israeli ambassador in Geneva. “It is, in our view, outside the competence and the authority of the Human Rights Council … This is kind of another instrument to pursue a discriminatory and politically motivated agenda.”

In Washington, the State Department lashed out at “such biased and politicized actions taken against Israel.”

“We have not provided, and will not provide, any information or support to the Office of the High Commissioner in this process,” the U.S. statement said. “We strongly urge other countries to do the same.” 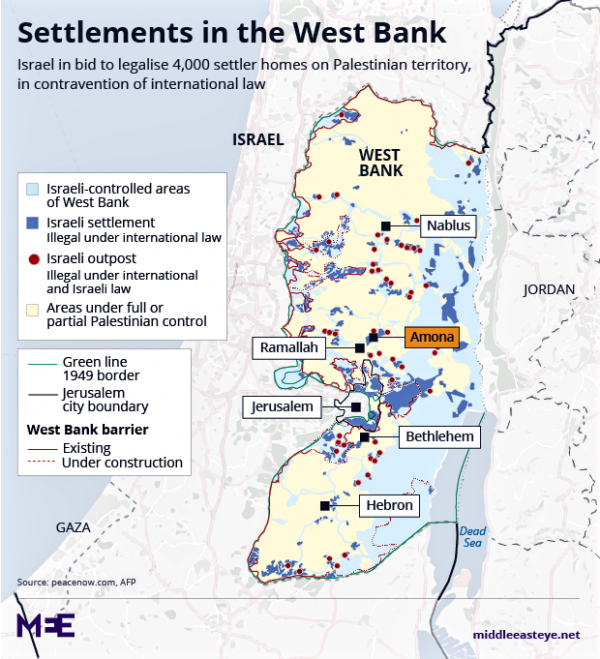 Eugene Kontorovich, head of International Law at the Kohelet Policy Forum, a conservative think-tank in Jerusalem, said no international law was being violated by countries who do business in occupied lands, including in the settlements, and said Israelwas being singled out unfairly.
“The U.N. Human Rights Council is supposed to be about human rights, not Israeli wrongs, so to create a report just about Israel seems to go against its own mission,”