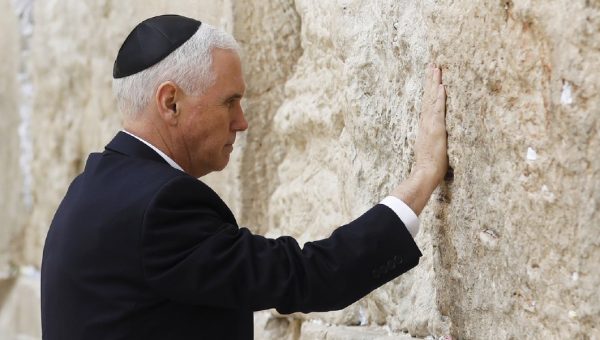 Acording to Haaretz Pence tweeted a video of him and his wife Karen laying a wreath and taking a tour of the Yad Vashem Holocaust memorial in Jerusalem during their visit to Israel last week. In the tweet, he paid tribute to what he called the “6 million Jewish martyrs of the Holocaust who 3 years after walking beneath the shadow of death, rose up from the ashes to resurrect themselves to reclaim a Jewish future.”

A few days ago, Karen & I paid our respects at Yad Vashem to honor the 6 million Jewish martyrs of the Holocaust who 3 years after walking beneath the shadow of death, rose up from the ashes to resurrect themselves to reclaim a Jewish future. #HolocaustRemembranceDay #NeverAgain pic.twitter.com/67UuC1cYI2

Angry replies to his tweet charged that Pence, an evangelical Christian, imposed – consciously or unconsciously – a Christian religious narrative on the tragedy that was disrespectful to the Jews who perished. Critics described it as “shameful” and “tone-deaf, ” the daily added

One wrote: “Are you referring to my Jewish relatives who died or survived in the Holocaust or did we become embroiled into some sort of Jesus analogy?” Another called Pence’s use of the term resurrection “a Christian-tinged euphemism as the word is rarely used out of that specific context” and accused him of “glossing over the fact that they were murdered by saying they were resurrected, just like the Jesus he claims to believe in.“

Mike Pence Jesused all of us Jews without our consent. What a smug, condescending fraud. https://t.co/lMMYxKFfLh

While Pence’s word choice may have been offensive to many Americans because it sounds suspiciously close to Christian terminology, the Hebrew translations of the imagery and wording he chose is quite common in Israel.

The word “resurrection,” which has strong Christian connotations in English, is also a legitimate translation of the Hebrew word tekuma, which also can be translated as “rebirth,” “recovery” or “revival.” It is frequently used to describe the establishment of the State of Israel following the Holocaust in the phrase “Shoah v’tekuma.” Some on Twitter objected to the use of the word “martyr” as implying that the victims of the Holocaust sacrificed themselves willingly rather than being murdered. However, the word “martyr” is translated into Hebrew as kedoshim, which is the term most frequently used to memorialize Holocaust victims in Israel. The official name of Israel’s Holocaust memorial day is, in fact, Holocaust Martyrs’ and Heroes’ Remembrance Day.

Haaretz added that beyond semantics, the larger issue is the implication in Pence’s tweet of an actual Jesus Christ-style resurrection of the Holocaust victims, through his statement that Jews “rose up from the ashes to resurrect themselves to reclaim a Jewish future” implies an actual return from the dead. Pence’s reference to “3 years walking beneath the shadow of death” was interpreted by many as making a deliberate parallel to the 3 days that passed between the crucifixion and resurrection of Jesus Christ.

“Jews who were murdered during the Holocaust did not ‘resurrect themselves.’ They are all dead and most of them not even buried. Mr. Pence should have left out the term ‘resurrect,’ which offended many Jews,” said Rabbi Ron Kronish, an expert on interreligious relations and a library fellow at the Van Leer Jerusalem Institute.

Kronish added that Pence’s “reference to a Jewish future was very vague and unclear. If he meant that the Holocaust led to the foundation of the Jewish State of Israel, this is blasphemy since it somehow justifies the Holocaust.”

The fact that “many Israeli politicians” often commit this sin themselves, he said, doesn’t make it right. “It would have been better for him to have said nothing about the Holocaust on this occasion if he or his advisers can’t figure out a sensitive and serious way to say it,” concluded Kronish.

The controversy comes a year after the Trump White House came under fire for issuing an official message that omitted Jews for International Holocaust Remembrance Day, and doubled down on the decision when it was criticized.

This year’s White House message included a clear reference to the Jewish victims, saying that “we take this opportunity to recall the Nazis’ systematic persecution and brutal murder of six million Jewish people. In their death camps and under their inhuman rule, the Nazis also enslaved and killed millions of Slavs, Roma, gays, people with disabilities, priests and religious leaders, and others who courageously opposed their brutal regime.”