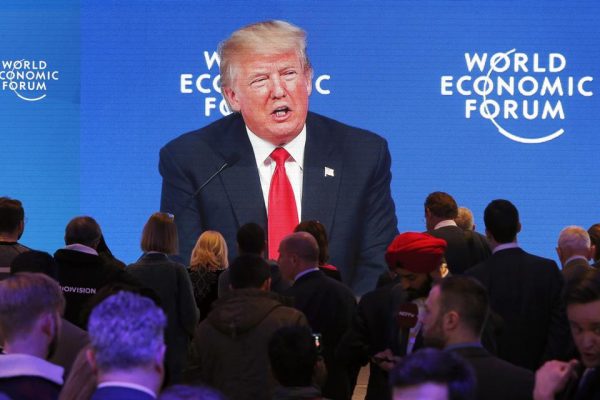 President Trump was booed at Davos for playing the fake news card
Share:

Donald Trump has taken his battle with the media on to the global stage by using a speech in Davos declaring the US open for business to accuse his press and TV critics of being mean, vicious and purveyors of fake news.

Some members of the audience of business leaders, politicians, academics and media representatives at the World Economic Forum responded to the president’s renewed onslaught by hissing.

Speaking to a packed hall on Friday, Trump boasted of his record since entering the White House and said there had never been a better time for businesses to hire and build in the low tax and low regulation economy he was creating.

It came as the latest figures showed the US economy growing at an annual rate of 2.6% in the final three months of 2017, weaker than the 3% growth Wall Street had been expecting.

“The world is witnessing the resurgence of a strong and prosperous America,” he said. “I’m here to deliver a simple message. There has never been a better time to hire, to build, to invest and to grow in the United States. America is open for business and we are competitive once again.

“After years of stagnation, the United States is once again experiencing strong economic growth. The world is witnessing the resurgence of a strong and prosperous America.”

But the speech, which contained a threat of fresh protectionist measuresand a warning that other countries should spend more on defence, was greeted less warmly than that of Emmanuel Macron earlier this week.

There was derision from the audience when Trump said in a question and answer session that he had not understood how “nasty, how mean, how vicious and how fake the media can be” before entering politics.

There was also hissing at the start of Trump’s speech when, in introductory remarks, the WEF founder, Klaus Schwab, said the president’s strong leadership was “open to misconception and biased interpretations”.

Fears that Trump would use his speech to announce new protectionist measures proved unfounded and he stuck to a script in which he insisted the US was committed to free and open trade, provided the rules were fair. He also sought international cooperation to “ denuke the Korean peninsula”.

While wooing big business, Trump made it clear that the address was also intended for a domestic US audience. “Only by hearing and responding to the voices of the forgotten can we create a bright future that is truly shared by all,” he said.

The rich and powerful people at the Swiss mountain resort had the power to transform lives and shape their countries’ destinies, Trump added. “With this power comes an obligation, however, a duty of loyalty to the people, workers, customers, who made you who you are,” he said.

The US president said the stock market had reached record highs on more than 80 separate occasions over the past year and tax cuts that offer most to corporations and the well-off were trickling down to workers.

“We lowered our corporate tax rate from 35% all the way down to 21%. As a result, millions of workers have received tax cut bonuses from their employers in amounts as large as $3,000,” he said.

Trump said he had cut 22 “burdensome” regulations for every new rule, saying this was freeing businesses and workers to flourish as never before. “Regulation is stealth taxation,” he said, attacking unelected bureaucrats for imposing anti-business and anti-worker rules. “In America, those days are over.”

Earlier this week, Washington announced that it was imposing tariffs on Chinese solar panels and washing machines, and Trump insisted the US would no longer “turn a blind eye to unfair economic practices including massive intellectual property theft, industrial subsidies, and pervasive, state-led economic planning”.

“We are also making historic investments in the American military, because we cannot have prosperity without security. To make the world safer from rogue regimes, terrorism and revisionist powers, we’re asking our friends and allies to invest in their own defences and to meet their financial obligations. Our common security requires everyone to contribute their fair share,” he said.

Winnie Byanyima, the executive director of Oxfam International, said the speech amounted to a “billionaires-first” policy.

“President Trump’s boastful sales pitch was a victory lap for the trillions of tax cuts that the wealthy elites and corporations have clamoured for. The evidence is clear: these tax cuts are looting the US treasury to enrich the 1%,” she said.

Phillip Jennings, the general secretary of the UNI global trade union, said: “Trump seems to think that America is all right if the stock market is all right.”

Marc Benioff, the founder and chief executive of Salesforce, a US cloud computing company, said: “I thought it was a great speech. I thought his economic narrative has become greatly enhanced now that the tax cuts have passed.”