In Davos, Gulf Arabs slam an absent Iran, accusing it of promoting a “vision of darkness” 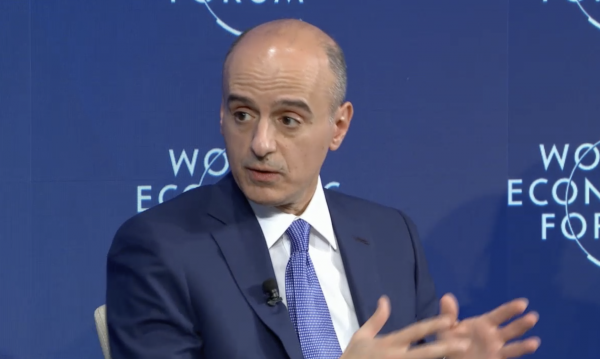 Adel Al-Jubeir Saudi FM said in Davos“In the Middle East, we have two competing visions. Vision of light …and a vision of darkness, which Tehran has been promoting . But “History has shown that light always prevails over darkness.”
Share:

Gulf Arab officials used the World Economic Forum in Davos on Wednesday to slam Iran for what they said was its destabilizing behavior in the region, taking advantage of Tehran’s conspicuous absence at the annual event.

Iranian foreign minister Mohammad Javad Zarif had been a regular presence at the annual forum that brings together top politicians, CEOs and bankers and he often clashed with his Gulf Arab counterparts at competing sessions.

But this year, he did not show.

As a result, the platform was wide open for Saudi Arabia, the United Arab Emirates and Bahrain to criticize Iran, as well as more measured criticism from others.

Iran, the leading Shi‘ite Muslim power, and Sunni Muslim Saudi Arabia, a key U.S. ally, are rivals for influence in the Middle East where they support opposing sides in Yemen, Syria, Iraq and Lebanon.

“In the Middle East, we have two competing visions. Vision of light … and we have a vision of darkness, and the vision of darkness is sectarianism, it’s trying to restore an empire that was destroyed thousands of years ago, it’s using sectarianism and terrorism in order to interfere in the affairs of other countries,” Saudi Foreign Minister Adel al-Jubeir told a panel at the forum.

“History has shown that light always prevails over darkness.”

Iran denies interference in Arab countries’ affairs. Last year at Davos, Zarif said Iran and Saudi Arabia should be able to work together to help end conflicts in Syria and Yemen.

Saudi-led forces, which back the Yemeni government, have also fought the Iran-allied Houthis in Yemen’s civil war. Saudi Arabia’s crown prince has described Iran’s supply of rockets to the Houthis as “direct military aggression” that could be an act of war.

Lebanon’s Prime Minister Saad al-Hariri gave a more measured critique. His coalition government, which includes the Iran-backed Hezbollah group, means that he has had to tread carefully. His Saudi allies accuse Hezbollah of waging war across the Middle East as agents of Iran.

Hariri’s shock resignation from Riyadh last year had thrust Lebanon to the forefront of the regional quarrel between Saudi Arabia and Iran. He later rescinded his decision.

“Iran is a country that we need to deal with … As prime minister, I would like to have the best relationship with Iran, but I would like it state to state,” Hariri said at a separate panel.

“Iran represents a challenge in the region maybe but dialogue also is a part of resolving these issues,” Hariri said. “Iran cannot meddle in Yemen.”