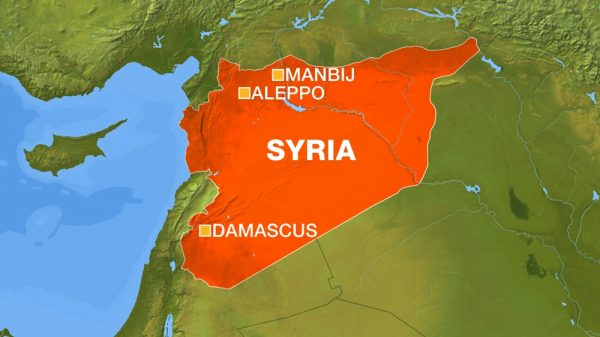 U.S. President Donald Trump urged Turkey on Wednesday to curtail its military operation in Syria and warned it not to bring U.S. and Turkish forces into conflict, but a Turkish source said a White House readout did not accurately reflect the conversation.

Turkey’s air and ground operation in Syria’s Afrin region, now in its fifth day, targets U.S.-backed Kurdish YPG fighters, which Ankara sees as allies of Kurdish insurgents who have fought in southeastern Turkey for decades.

Turkish President Tayyip Erdogan said he would extend the operation to Manbij, a separate Kurdish-held enclave some 100 km (60 miles) east of Afrin, possibly putting U.S. forces there at risk and threatening U.S. plans to stabilize a swath of Syria.

Speaking with Erdogan by telephone, Trump became the latest U.S. official to try to rein in the offensive and to pointedly flag the risk of the two allies’ forces coming into conflict.

“He urged Turkey to deescalate, limit its military actions, and avoid civilian casualties,” a White House statement said. “He urged Turkey to exercise caution and to avoid any actions that might risk conflict between Turkish and American forces.”

The United States has around 2,000 troops in Syria.

However, a Turkish source said the White House statement did not accurately reflect the content of their phone call.

“President Trump did not share any ‘concerns about escalating violence’ with regard to the ongoing military operation in Afrin,” the source said, referring to one comment in the White House summary of their conversation.

“The two leaders’ discussion of Operation Olive Branch was limited to an exchange of views,” the source said.

Trump said in response to Erdogan’s call on the United States to end the delivery of weapons to the YPG that the United States no longer supplied the group with weapons and pledged not to resume the weapons delivery in the future, the source said.

The offensive has opened a new front in Syria’s multi-sided, seven-year-old civil war and complicated U.S. efforts in Syria.

The United States hopes to use the YPG’s control of the area to give it the diplomatic muscle it needs to revive U.N.-led talks in Geneva on a deal that would end Syria’s civil war and eventually lead to the ouster of President Bashar Assad.

The United States and Turkey, while themselves allies in the North Atlantic Treaty Organization, have diverging interests in Syria, with Washington focused on defeating the Islamic State militant group and Ankara keen to prevent Syria’s Kurds from gaining autonomy and fueling Kurdish insurgents on its soil.

In the short-term, analysts say, the United States has little pressure it can apply on Turkey given the U.S. military’s heavy dependence on a Turkish base to carry out air strikes in Syria against Islamic State.

Its sway is further limited by the United States not having reliable military partners in Syria other than the Kurds, said Gonul Tol, director of the Center for Turkish Studies at Washington’s Middle East Institute think tank.

“The U.S. needs Turkey not to spoil things … until now, Washington has walked a very fine line between working with the Kurdish militia and also preventing a complete breakdown in relations with Ankara,” Tol said.

A U.S. official, speaking on condition of anonymity, said Trump values his relationship with Erdogan, but conceded that the United States has limited leverage and that the Trump administration was unlikely to commit more troops or covert operators to Syria, even if Turkey made a move from Afrin to Manbij.

“The U.S. has effectively said you can do this operation against Afrin because it is outside my area, but please keep it limited,” said Bulent Aliriza, director of the Turkey Project at the Washington-based think tank CSIS. “So it has not felt the need to go beyond the rhetorical means that it has employed.”

Erdogan has looked to bolster ties with Russia and Iran in recent years, in part because of frustration with Washington’s support for the YPG in the fight against Islamic State.

Ankara sees the YPG as an extension of the outlawed Kurdistan Workers Party (PKK) insurgent group, which is deemed a terrorist organization by the United States, the EU and Turkey.

In a clear sign of rapprochement, Ankara is buying an S-400 missile defense system from Russia – unnerving NATO officials, who are already wary of Moscow’s military presence in the Middle East. The S-400 is incompatible with NATO’s systems.

However, analysts say those moves are largely tactical and ultimately Turkey will be open to listening to U.S. concerns about its military operation, given that Ankara needs the European Union for trade and NATO partners for its security.

“I think behind closed doors, he really would not want a complete break in Turkey’s relations with the West,” Tol said.

Max Hoffman, with the Center for American Progress, said the United States still had considerable leverage and could look at imposing sanctions on Turkey in the future, should Turkish forces disregard warnings on Manbij.