Some pageant contestants hit a hump in the road this week. That is, a camel beauty contest in Saudi Arabia disqualified a dozen camels for receiving Botox injections to make them more attractive.

Saudi media reported that a veterinarian was caught performing plastic surgery on the camels a few days before the pageant, according to UAE’s The National. In addition to the injections, the clinic was surgically reducing the size of the animals’ ears to make them appear more delicate.

“They use Botox for the lips, the nose, the upper lips, the lower lips and even the jaw,” Ali Al Mazrouei, a regular at such festivals and the son of a prominent Emirati breeder, told the newspaper. “It makes the head more inflated so when the camel comes it’s like, ‘Oh look at how big that head is. It has big lips, a big nose.’ ”

Real money is at stake: About $57 million is awarded to winners of the contests and camel races, The National reports, with more than $31.8 million in prizes for just the pageants. 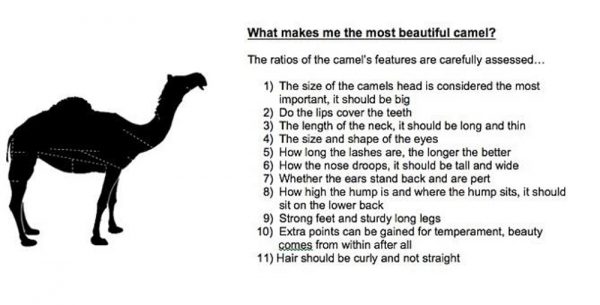 The festival provides a number of informative graphics about camels, including a diagram titled Standards of Camel Beauty. It is sadly unspecific about what makes for handsome nostrils and withers, though it does mention a “leathery mouth.”

Among regulations about the age, breeding and teething of the dromedaries, contest rules say “[i]n case of fraud to change the natural form of participating camels, the participant shall be excluded immediately” — with violators banned from this year’s contest and the next five sessions of the festival, along with possible legal penalties for violating the kingdom’s animal welfare laws.

Camel owner Ali Obaid told The National that cheaters will get creative to get an edge and will alter an animal’s appearance for months before it’s sold to a buyer.

“For example they start to pull the lips of the camel, they pull it by hand like this every day to make it longer,” he explained to the newspaper. “Secondly, they use hormones to make it more muscular and Botox makes the head bigger and bigger. Everyone wants to be a winner.”

The beauty contest, launched in 2000, is a centerpiece of the King Abdulaziz Camel Festival. Last year, authorities moved the festival from a remote location in the desert to a site an hour and a half from Riyadh, and this year attendance has increased by a third, according to Reuters.

“The camel,” the chief judge of the show, Fawzan al-Madi, told the newswire, “is a symbol of Saudi Arabia. We used to preserve it out of necessity, now we preserve it as a pastime.”