Tillerson: US troops will stay in Syria to prevent ISIS from regrouping 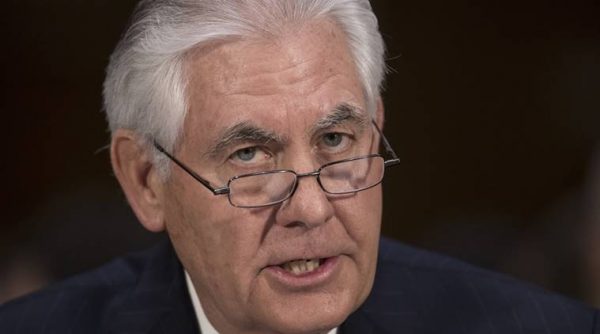 of State Rex Tillerson said Wednesday it was “crucial” for the United States to maintain an open-ended military and diplomatic presence in Syria to prevent Islamic State militants from regrouping, to thwart Iranian influence and ultimately to see the exit of President Bashar Assad.

Tillerson outlined what he described as a new, more engaged Trump administration policy for the war-riven country during an address at the Hoover Institution think tank at Stanford University.

He described a plan of “increased diplomatic action” and a “new emphasis on a political solution” for the Syrian civil war, which has killed at least half a million people since 2011 and sent millions more fleeing in what became the largest refugee exodus toward Europe since World War II.

Tillerson said the administration also will maintain a small “conditions-based” military presence in Syria to track and kill the dwindling number of Islamic State militants. The Pentagon said in December that it had about 2,000 U.S. military personnel deployed in Syria.

Targeted by an American-led coalition, as well as local militias, Islamic State has lost most of the territory it seized in Syria and Iraq in 2014, but it remains a lethal threat. On Monday, two suicide bombers killed about 35 people in Baghdad in the first major attack in the Iraqi capital since the government declared victory over the extremist group last month.

Islamic State “presently has one foot in the grave, and by maintaining an American military presence in Syria, it will soon have two,” Tillerson said.

“We cannot repeat the mistake of 2011,” he said, alluding to President Obama’s withdrawal of most U.S. combat troops from Iraq after nine years of war. Critics say the U.S. pullout added to Iraq’s instability and allowed a local Al Qaeda affiliate morph into Islamic State.

Tillerson’s remarks seemed to signal an indefinite U.S. engagement in Syria. It also represented a more forceful determination to get rid of the Syrian autocrat than the Trump administration has advocated in the past.

“A total withdrawal of American personnel at this time would help Assad,” Tillerson said. He said a continued U.S. presence will “help pave the way for legitimate local civil authorities to exercise responsible governance of their own liberated areas.”

Assad’s departure “will create the conditions for a durable peace within Syria and security along the borders for Syria’s neighbors,” Tillerson added later during a question-and-answer session.

Both the Obama and Trump administrations have backed United Nations-led talks on Syria based in Geneva, but they have made little progress toward negotiating a political solution to the civil war. Assad — backed by Russia and Iran — now seems firmly in control of much of the country.

Tillerson conceded that some Americans might be disturbed at the prospects of long-term involvement in Syria. But U.S. disengagement now, he said, would give Iran a “golden opportunity” to spread its influence and could allow Islamic State to regroup.

Tillerson stopped at Stanford on his way back to Washington from Vancouver, Canada, where he co-hosted a daylong meeting of allies from the Korean War to redouble efforts to stop North Korea from expanding or using its nuclear arsenal.