Trump isn’t coming to London because he is not welcome here, says its mayor 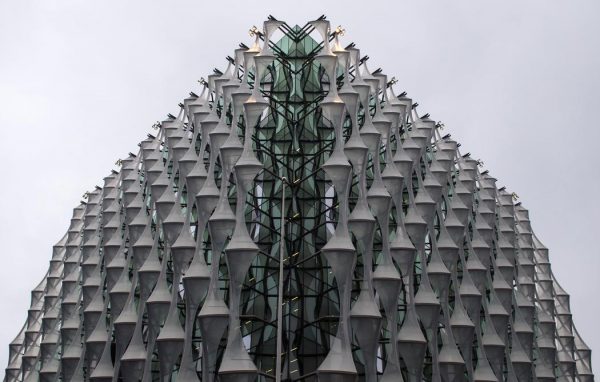 The new US Embassy, in Nine Elms, London, which is due to open in February. Getty Images.
Share:

Donald Trump Friday scrapped his planned visit to London to open the new U.S. embassy next month, citing the Obama administration’s decision to sell off the old building for “peanuts” — a “bad deal” not to be associated with, he said.

Unfortunately for the president, the embassy sale was rubber stamped by George W. Bush on Oct. 8, 2008, a month before Obama’s election, suggesting Trump simply refuses to face the protests his visit would spur.

Trump confirmed the cancellation amid a barrage of “executive time” tweets Friday morning, noting how the old embassy was “the best located and finest embassy in London.”

Reason I canceled my trip to London is that I am not a big fan of the Obama Administration having sold perhaps the best located and finest embassy in London for “peanuts,” only to build a new one in an off location for 1.2 billion dollars. Bad deal. Wanted me to cut ribbon-NO!

The U.S. Government decided to relocate its embassy for security reasons; the Grosvenor Square building was susceptible to attack, it said.

The building was eventually sold to the Qatari royal family, the sale financing the building of the new embassy, which sits in Nine Elms near Battersea.

“The project has been funded entirely by the proceeds of the sale of other US Government properties in London, not through appropriated funds,” the embassy website says of the new $1 billion structure, which will open on Jan. 16.

Not only would the visit have sparked mass protests from Britons, Trump would have faced opposition from MPs, with many resolute that Trump would never be allowed to address parliament.

There was outrage when Prime Minister Theresa May extended the offer of a state visit to Trump last year after she became the first world leader to visit the the new president at the White House.

May was still confident last week that Trump’s visit would go ahead, telling MPs the U.S. president “will be coming to this country.”

London Mayor Sadiq Khan, who had long voiced his opposition to Trump’s visit, said Friday morning that the U.S. president had “finally got that message.”

Many Londoners have made it clear that Donald Trump is not welcome here while he is pursuing such a divisive agenda. It seems he’s finally got that message. pic.twitter.com/YD0ZHuWtr3

Many Londoners have made it clear that Donald Trump is not welcome here while he is pursuing such a divisive agenda. It seems he’s finally got that message. pic.twitter.com/YD0ZHuWtr3

Many members of Britain’s political class were similarly scathing:

1. Bush administration took the decision on relocation
2. You cancelled because you weren’t welcome – and won’t be missed
3. Unless you live North of the River Thames you don’t get to have a go at South London – that’s our job https://t.co/leC27Id19i