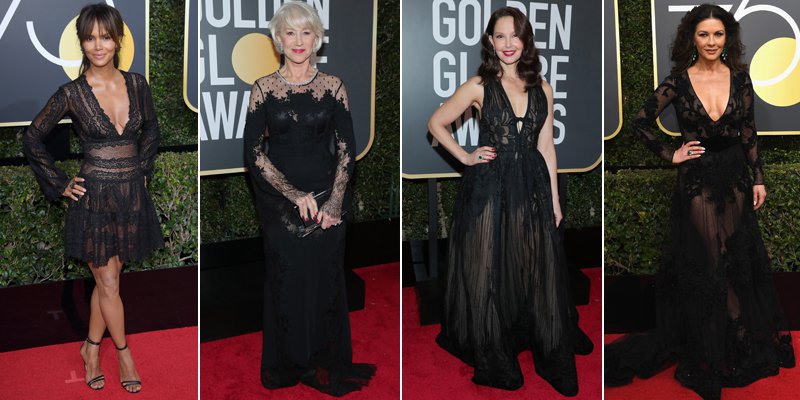 A sea of stars wore black to the prestigious awards to show solidarity with victims of harassment and assault.

Actors, producers and presenters across Hollywood stood together in support of the #TimesUp movement by donning the colour at the annual awards show, held in Beverly Hills on Sunday night.

Eight stars, including Michelle Williams and Emma Stone, also brought activists as their guests on the night, including the #MeToo movement founder Tarana Burke, while many men wore #TimesUp pins in protest.

The stars made an influential stand in support of sexual and harassment victims, an issue which made headlines following serious allegations of sexual misconduct against producer Harvey Weinstein.

The #TimesUp movement also aims to fight inequality and gender bias in the workplace, partnering with leading advocates to improve laws, employment agreements, and corporate policies, according to its website.

And at the Golden Globes it joined with award-winning actors and actresses, who turned to designers around the world to help them support the #whywewearblack cause on the evening.

Among the labels who provided stars with gowns were many from Lebanon , including Elie Saab, who kitted out Ashley Judd, the actress who was one of the first to publicly reveal her experiences at the hands of Weinstein.

The keen humanitarian wore an embroidered floor-sweeping dress for the occasion, finished with a romantic bow-tied neckline.

The Lebanese label also dressed Game of Thrones star Lena Headey in a delicately ruffled gown, given added edge with a touch of sheer panelling.

Ras Baalbek-born designer Zuhair Murad kitted out a trio of A-listers at the awards, with British acting icon Helen Mirren sporting a lace and chiffon number.

With elegantly sweeping sleeves and impressively dainty needlework, the gown was certainly rich in dramatic flair.

The Lebanese label also dressed Halle Berry and Catherine Zeta Jones on the night, with the latter donning a sheer floor-length gown with a smattering of sequins.

Berry, however, plumped for a shorter hemline, choosing a bell-sleeved lace mini dress with a gossamer-thin lightness.

Rounding out the regional designers on show at the Golden Globes was Ashi Studio, which dressed German supermodel and TV presenter Heidi Klum.

The label, helmed by Beirut-based designer Mohammed Ashi, crafted a structured strapless number for the star, imbued with theatrical flounce thanks to lashings of feathers and lace.