Strongmen (and no women) seek re-election in 2018 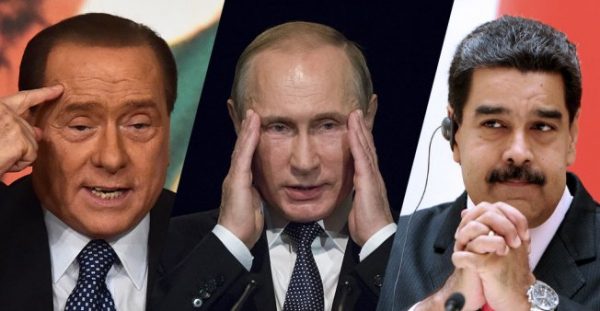 We take a look at the key electoral contests of 2018 as Venezuela’s Nicolas Maduro battles for survival, Italy’s Silvio Berlusconi eyes an umpteenth comeback and Vladimir Putin bids to become Russia’s longest-serving ruler since Joseph Stalin.

If 2017 was the year of botched independence referendums – think Catalonia and Iraqi Kurdistan – the next 12 months will see strongmen (and no women) around the world seek re-election and some jaded old-timers stage unlikely comebacks.

Who will dare challenge Egypt’s strongman Abdel Fattah al-Sisi? The president’s term is up for renewal sometime between February and May, and the former general who toppled Mohammed Morsi in 2013 has made no mystery of his plans to carry on. In the last presidential vote, four years ago, Sisi’s rise to power was rubber-stamped by 96 percent of voters, according to official results. This time it’s still not clear who will be allowed to run against him. When Ahmed Shafiq, a former prime minister, announced his candidacy from the United Arab Emirates, he was promptly expelled to Cairo, where he soon said he was pulling out of the contest. Last month, army colonel Ahmed Konsowa was sentenced to six years in prison for violating military rules after he announced his intention to challenge Sisi. Another candidate, prominent rights activist Khaled Ali, has also thrown his hat in the ring. Hanging over his bid, however, is a September conviction for allegedly making an obscene hand gesture the day he won a court case against the government’s decision to transfer two strategic Red Sea islands to Saudi Arabia.

Obscene comments and gestures have long been a trademark of Italy’s four-time former prime minister Silvio Berlusconi, who has bounced back from political oblivion in recent months to recast himself as an unlikely contender in Italy’s March 4 general election. Despite a string of fraud and sex scandals, and a ban from public office, the 81-year-old tycoon is poised to play a prominent role in a future coalition government if his Forza Italia continues its steady rise in the polls. Also back in the picture is former centre-left premier Matteo Renzi, who is struggling to reassert his authority over a Democratic Party worn down by five gruelling years in power. As in the last election in 2013, the anti-establishment mood is likely to favour the Five-Star Movement of comedian Beppe Grillo, while the continuing migrant crisis is playing into the hands of the hard-right, anti-EU Northern League. All of which points to a highly unpredictable contest, followed by a new round of horse-trading to cobble together a coalition government.

There will be no such uncertainty in Russia, where Vladimir Putin is bidding to extend his 18-year iron grip on power (including two stints as prime minister). Opposed only by token candidates, Putin is widely expected to win a fourth term in the March 18 poll – his only prominent opponent, Alexei Navalny, being barred from running due to a controversial embezzlement conviction. The opposition leader has called for a boycott of the vote, mindful that a low turnout would be seen as a setback for the president and embolden his critics at home and abroad. The European Union has already warned that Navalny’s exclusion “casts a serious doubt on political pluralism in Russia and the prospect of democratic elections”. Putin has been in power since 1999 and a victory in March would extend his rule until 2024, making him the longest serving Russian leader since Joseph Stalin.

One of the few European countries where Putin gets a warm welcome these days, Hungary will hold its parliamentary election the following month. Like Putin’s Russia, it has become something of a pariah state to many Western Europeans alarmed by its government’s increasingly illiberal shift. Prime Minister Viktor Orban is routinely criticised by his EU partners for curbing fundamental liberties, such as a free press, and weakening the judiciary. But polls suggest the nationalist, anti-migrant leader, who has been in power since 2010, is a shoe-in for a third term in office. Indeed, it is a measure of the Hungarian opposition’s weakness that Orban’s closest challenger is the far-right, xenophobic Jobbik party.

Lebanon hasn’t held a parliamentary election since 2009, for want of consensus on a new electoral law. The May 6 vote will inaugurate a system of proportional representation whose proponents say it will help renew the country’s factional political class and better represent its multi-confessional society. As always, the election will be closely watched by regional powers Saudi Arabia and Iran, who have long competed for influence over Lebanese politics. While the country’s delicate balance of power is unlikely to shift much, a smooth election would in itself be a considerable achievement.

Will it be third-time lucky for Mexico’s ever-frustrated Manuel Lopez Obrador? Twice the former mayor of Mexico City came second in a presidential election and twice he alleged widespread fraud. In 2006 he went so far as to proclaim himself president and form his own government. This time the radical populist has spurned the traditional leftwing PRD party to start the Movement for National Regeneration, known as Morena. Early polls give him a 10- to 15-point lead over the likely candidate of the ruling PRI party, which has been scarred by corruption allegations. President Enrique Nieto is himself barred from running due to Mexico’s one-term presidential limit. Obrador has said the relationship with the US will not be “one of submission” on his watch. Should he win the one-round July 1 election, sparks are certain to fly with his hot-headed US counterpart.

Another Latin American country that could lean heavily to the left is Brazil, where the Workers’ Party is eyeing a spectacular return to power just two years after former president Dilma Rousseff’s dramatic removal. The party’s comeback champion is – once again – Luiz Inacio Lula da Silva, who ran Brazil from 2003 to 2011. Caught up in a sprawling corruption scandal that has rattled Brazilian politics, Lula was sentenced to prison in July for accepting bribes. But he remains free as appeals courts sort out whether he can run, and polls currently give him a large lead ahead of the October election. Despite his conviction, the former president, now aged 72, is still cherished by the working class for bringing millions out of poverty. Lula’s chances could also be boosted by the rise of right-wing firebrand Jair Bolsonaro, a deeply divisive figure whose extremist views risk alienating centrist voters. Meanwhile, the hugely unpopular incumbent Michel Temer, who helped engineer Rousseff’s fall, has ruled out running for re-election.

At 84, Paul Biya is one of the world’s oldest heads of state – and one of the longest-serving, having ruled uncontested since 1982. Nicknamed “the Sphinx” due to his taste for secrecy, the octogenarian president has remained tight-lipped about his plans to seek a seventh term in office. But the abrupt demise of his Zimbabwean peer Robert Mugabe and the growing unrest in Cameroon’s Anglophone provinces are ill omens ahead of planned October elections. If (and it’s a huge if) Biya heeds calls for him to step aside, his Cameroon People’s Democratic Movement (RDPC) is likely to supply a hand-picked successor.

While he is yet to declare his candidacy, Venezuela’s embattled president Nicolas Maduro is widely expected to seek re-election before the year’s end – assuming an election is at all held. Hugo Chavez’s uncharismatic successor has seen his approval ratings plummet amid a worsening economic crisis and a bloody crackdown on anti-government protests. But his ruling United Socialist Party has ensured the opposition is all but barred from the future contest. The opposition’s two main figureheads, Leopoldo Lopez and Henrique Capriles, are respectively under house arrest and barred from public office. And last month the country’s Constituent Assembly, which was convened by Maduro to sideline the opposition-controlled Congress, ruled that opposition parties who boycotted recent local elections had lost legitimacy, potentially eliminating them from the presidential race.

Another president who risks losing control of Congress is Maduro’s US nemesis Donald Trump. Last month’s shock defeat in the Alabama Senate race sent an ominous signal to the president’s Republican Party ahead of the November 6 midterm elections, in which a third of the Senate and all of the House are up for renewal. Early polls point to a two-digit lead for the Democrats, suggesting control of both chambers could change hands. Much of the campaigning is expected to focus on the sprawling tax overhaul the GOP has just forced through Congress, with Republicans hailing a boon for households and the economy while Democrats slam an irresponsible gift to the rich. But voters may also relish the opportunity to put a check on their erratic president, whose approval ratings after 12 months in office are the lowest in modern US history.

Wrapping up the electoral calendar will be the year’s most sensitive contest of all – assuming DRC’s long-delayed presidential bout goes ahead as planned. In theory, the December 23 poll will designate a successor to President Joseph Kabila, who has ruled Congo since his father was assassinated in 2001. Kabila says the repeated delays in the election – which was initially scheduled for 2016 – are due to difficulties registering voters across the sprawling central African country. But opponents have accused the incumbent of biding his time to cling onto power, as others have done in neighbouring Rwanda and Congo-Brazzaville. Kabila is yet to categorically state he will step aside come December, and observers remain fearful that further delays could trigger a return to the violence that blighted this mineral-rich but impoverished nation at the turn of the century.