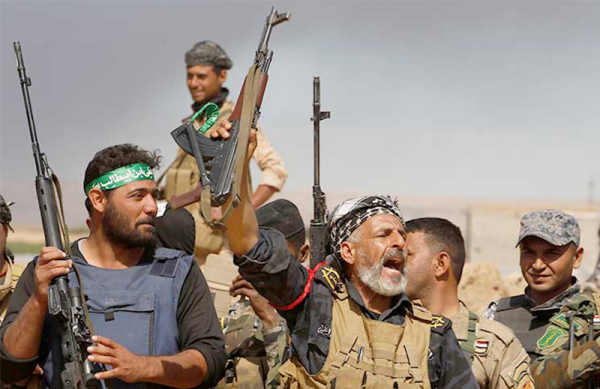 BY AMIR TOUMAJ Iraqi-Shiite Grand Ayatollah Ali Sistani announced his support of the Popular Mobilization Forces (PMF) and “requested that all weapons come under government’s control” in a statement earlier this month. He also urged Shiite armed groups to stay away from political participation. While it appears that Sistani scored a win for Prime Minister Haider al Abadi, the arbitrary restriction is not expected to rein in the Iranian-backed network’s formations and influence.

Sistani is recognized as the top Shiite religious authority in Iraq and his words shape government policy.

“The victory over Daesh [Islamic state] doesn’t mean the end of the battle with terrorism,” Sistani’s representative Sheikh Abdulmehdi al Karbalai proclaimed in Friday prayer, mentioning the existence of “sleeper cells lying in wait for opportunities to undermine the country’s security and stability.”

“It is necessary to make continued use of this important energy within the constitutional and legal frameworks that restrict arms to the state,” Sistani’s representative said.

He added that the PMF had earned a reputation that exceeded any political force in Iraq and using their popularity for political purposes would sully their “holy status.”

The PMF is a conglomeration of Iraqi militias formed following Sistani’s 2014 fatwa to drive the Islamic State from the country, and was enshrined into law last year. Iranian-linked figures dominate the PMF Commission: its operations chief and de facto leader is Abu Mahdi al Muhandis, a US-designated terrorist who is the deputy of Qods Force chief Qassem Soleimani in Iraq. Iranian-backed forces constitute the majority of the approximately 60 militias in the PMF, which has included formations loyal to Sistani.

Some earlier reports suggested that Sistani would disband the PMF. However, Sistani abstained from both overturning his religious edict and calling for the dissolution of the PMF. Sistani’s position is consistent with that of Abadi who issued a statement “welcoming the Shiite cleric’s call against exploiting PMF volunteers and fighters politically.”

They both face a difficult dilemma: disbanding 60,000 – 100,000 militiamen without replacing the numbers leaves a security vacuum, as well as putting tens of thousands of fighters out of jobs. The Iranian-backed network exploits precisely that vacuum for its advantage.

Iran has warned against disbanding the Shiite-dominated PMF. Supreme Leader Ali Khamenei, who once – called the PMF a “blessed phenomenon,” seeks to keep Shiite militias powerful in Iraq possibly to use them as proxies to counter Western pressure. The Iran-backed Shiite militia forces is one of “the biggest challenges” in Iraq, as previously signaled out by Iraqi Sunni Vice President Osama al-Nujaifi.

Iranian-backed figures are working around the latest restriction. Prominent groups including Badr Organization and Asaib Ahl al-Haq announced that their armed forces would remain in the PMF, “obey” the chain of command, and “cut” ties with political wings. These Iranian-backed groups are reportedly in talks form a coalition for the May 2018 parliamentary elections.

For his part, Shiite cleric Muqtada al Sadr, who had asked the Mr. Abadi to prevent the paramilitary forces from participating in elections scheduled for May, urged his fighters within the Peace Brigades to hand state-issued weapons back to the government, but said his forces would continue to protect a holy Shiite shrine in Samarra, north of Baghdad.

The Badr Organization itself is case and point of how Iranian-backed militias can undermine the state from within it. Following the US invasion of Iraq, Badr was invited into the Federal Police, and, over the years, has grown to dominate it and the Interior Ministry, which controls the police. These forces have often operated outside the law, for instance running death squads against Sunni civilians. The PMF has legalized extremist groups that answer to Tehran such as Kataib Hezbollah, a US-designated terrorist organization, and Harakat al Hezbollah al-Nujaba, whose leader has said he would overthrow the government in Baghdad if ordered to do so by Khamenei. Iranian-backed militias have previously killed and maimed hundred of coalition troops during the Iraq War and continue to threaten American forces. Their deployments to Syria at the Islamic Republic’s request to preserve Bashar al Assad against a Sunni uprising have fanned the flames of sectarian violence. Sunni and Sunni extremists feed into and benefit from this vicious cycle.

Sistani’s endorsement to separate arms from politics will only help pave the way for the elections putting into consideration that he said that his fatwa is still effective because “its objective is still valid.” Thus, the recent move of the PMF leaders in putting their fighters and weapons under the Iraqi government’s control seems a preparation for the 2018 elections, while they will maintain the influence of their networks even if they are incorporated into the state’s security bodies. Without a sustained effort – such as removing Muhandis from his senior post in the PMF – Sistani’s fatwa is not expected to significantly hamper the Iranian-backed forces, which act as a Trojan horse in the Iraqi state.