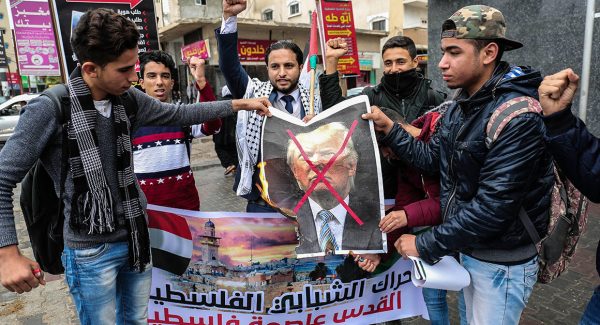 In a symbolic pushback to President Donald Trump’s declaration on the status of Jerusalem, Iranian lawmakers on Wednesday voted to recognize the contested city as the capital of the Palestinians.

Ali Larijani, speaker of the Parliament of Iran, said that the bill’s timing was “important,” given Trump’s December 6 announcement that he had ordered the relocation of the U.S. embassy to Jerusalem, upending decades of U.S. foreign policy in relation to the Israeli-Palestinian conflict.

“It comes in response to the recent U.S. decision to recognize Jerusalem as Israel’s capital in hopes of dealing a blow to Muslims,” he said, according to Turkish state news agency Anadolu.

The Palestinians seek East Jerusalem as the capital of any future state. It is the location of Haram al-Sharif, or Noble Sanctuary, for Muslims, and is the third-holiest site in Islam. It is a place contested by both Muslims and Jews, who refer to it as the Temple Mount, one of the holiest sites in Judaism.

Trump angered Arab leaders from Jordan to Iraq with his Jerusalem announcement, ignoring their warnings that acknowledging Jerusalem as the capital of Israel would set off a wave of anger across the Muslim world. The Palestinian militant group Hamas, which Iran backs, has called for a new Palestinian intifada, or uprising.

Saudi Arabia’s King Salman and Turkish Prime Minister Binali Yildirim met on Wednesday and discussed the status of Jerusalem and their support of the Palestinians.

While the right-wing Israeli government has lauded Trump, and even made plans to name a train station after him, Palestinian President Mahmoud Abbas called Trump and his administration biased and pledged to never accept a peace agreement brokered by the sitting president.

The U.N. General Assembly last week rejected Washington’s recognition of Jerusalem as Israel’s capital, reaffirming that the city’s status should be agreed between Israelis and Palestinians through direct negotiations.

Iran’s Supreme Leader Ayatollah Ali Khamenei also took aim at Trump on Wednesday, tweeting that he was a lesser president than Ronald Reagan.

“Reagan was both wiser and more powerful than Trump. They took measures against Iran: they shot down one of our passenger aircrafts. But where is Reagan, and how powerful is the Islamic Republic now?” he tweeted, in reference to the 1988 crash of Iran Air Flight 655.

“U.S. govt spends a tremendous amount of money on sowing discord among people, and takes up the wealth of rich rulers in the region. By God’s Grace—they should know—we will progress powerfully. By God’s will, we will disappoint U.S. on all arenas,” he wrote in a second tweet.