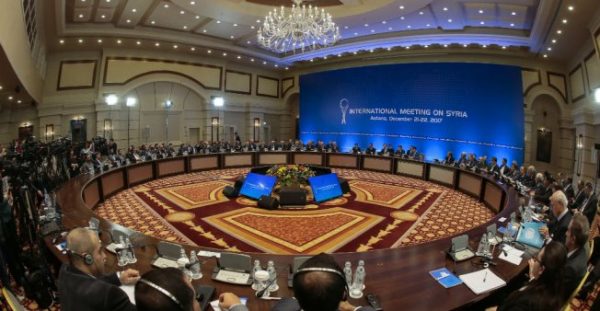 Syrian regime representatives and opposition delegates along with other attendees take part in Syria peace talks in Astana on December 22. AFP
Share:
Russia, Turkey and Iran agreed Friday to hold a peace congress for Syria in Russia’s Black Sea resort of Sochi in late January after previous attempts to hold a conference collapsed.

A Syrian “Congress of National Dialogue” will be held in the Russian city of Sochi on January 29-30, Russia said alongside its allies Turkey and Iran, while the United Nations urged them to support the struggling Geneva peace process.

Moscow, Tehran and Ankara announced the date in a joint statement after talks in the Kazakh capital Astana that also involved representatives of Syrian President Bashar al-Assad and some opposition groups.

The congress will see “the participation of all segments of Syrian society”, said the statement.

“To this end, three guarantors will hold a special preparation meeting in Sochi before the congress on 19-20 January,” it added.

But the trio has yet to agree on a list of participants – Turkey had earlier objected to the presence of the main Syrian Kurdish group – or to confirm their participation.

While Russian officials and Syrian President Assad have spoken enthusiastically of the plan, rebel representatives have been wary and the United Nations has yet to endorse it.

UN special Syria envoy Staffan de Mistura, who also attended the Astana talks, said that Russia’s plan to convene the congress should be assessed by its ability to contribute to and support the UN-led Geneva talks on ending the war in Syria.

The Astana talks have run in parallel to the negotiations taking place in Geneva with the backing of the United Nations, but neither set of talks have borne much fruit.

Turkey’s Prime Minister Binali Yildirim said last month that the “Astana process” led by Russia, Turkey and Iran is working alongside the UN’s long-running Geneva peace talks rather than competing with them.

“We told the Russians that Sochi will not be an alternative to Geneva, and we want to end the misery of the Syrian people and let humanitarian aid in,” Ahmed Tohmeh, the head of the rebel delegation, said in the statement released Friday.

Ayman al-Aasemi, a member of the rebel delegation in Astana, told AFP there was “an openness to the idea of Sochi”.

“It’s not a rejection. We’ve asked for more details – how often it will meet, what’s the essential goal,” said Aasemi, who also credited Moscow with “opening up” during the latest round of talks.

“According to the Russians, the constitution and the elections will be the main topics.”

“We will go back to our popular base and the people we represent in Syria, and see what our interest is in attending this conference. But in my view, it’s better to attend than not attend,” Aasemi said.

The rebel delegation said its focus was on making progress on detainees and forcibly disappeared people. The Astana trio has been discussing the issue since April but has so far failed to reach a final agreement. Instead, they set up a working group on detainees on Friday, which de Mistura said was “commendable as a first step towards reaching a comprehensive arrangement between the conflicting parties”.

The warring sides – who continue to avoid direct talks in Astana – traded barbs once again, with the rebels accusing the Damascus government of cooperating with the Islamic State group, which has been defeated but not fully eliminated.

Government negotiator Bashar al-Ja’afari, in turn, described the presence of Turkish and US forces in Syria as “blatant aggression”, even though Russia and Iran, which back Damascus, have agreed to Ankara’s role in safeguarding the so-called de-escalation zone in Idlib province.

“We demand the immediate and unconditional withdrawal of foreign troops from our territory,” Ja’afari told reporters.

Russia completed a partial withdrawal from Syria on Friday ordered by President Vladimir Putin, ending more than two years of active Russian engagement in the conflict.

Putin made a surprise visit to Syria last week where he ordered the start of a pullout of Russian troops, saying their task there had been largely completed.

A total of 36 planes and four helicopters have returned to their permanent bases, while 157 motor vehicles were delivered to Russia by sea, said Russian Defence Minister Sergei Shoigu. Special forces troops, a medical unit, a battalion of military police, doctors and de-miners have been brought back to Russia, he added.

Three battalions of military police and officers of the Russian Center for Reconciliation will remain in Syria as well as its two military bases.

Shoigu also said that Russian military ships and submarines armed with “high-precision weapons” will remain permanently present in the Mediterranean.