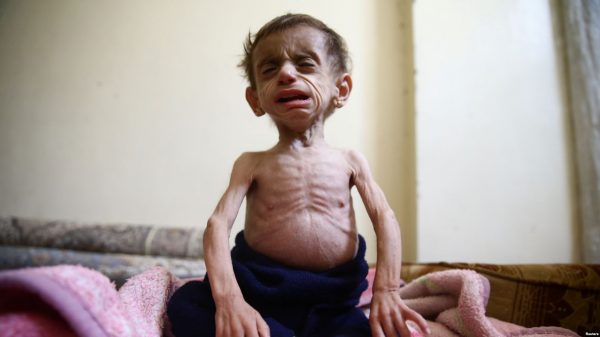 Two-and-a-half year old Hala al-Nufi, who suffers from a metabolic disorder which is worsening due to the siege and food shortages in the eastern Ghouta. The U.N. High Commissioner for Human Rights, Zeid Ra’ad Al Hussein accuses the Syrian government of denying food and medical supplies to hundreds of thousands of civilians besieged in Eastern Ghouta, on the outskirts of the capital Damascus.
Share:

A charity and a leading British surgeon have made a desperate appeal for the evacuation of seven children with “curable cancer”, aged between eight and 12, trapped in a besieged Syrian town.

The children, and 175 others in need of treatment no longer available in the area, live in Ghouta, an area just to the east of Damascus that was a bread-basket for the Syrian capital before the war.

It has been under siege by forces loyal to President Bashar al-Assad for years, but troops tightened their cordon after a ground offensive in April, pushing an estimated 400,000 people still living there “to the brink of disaster”.

Eastern Ghouta should be covered under a de-escalation agreement brokered by Russia, Turkey and Iran to reduce conflict across Syria, but residents have seen no let-up in the fighting or the siege.

“Hospitals in Ghouta are on their knees, with few medicines left and kind words for the dying children the only palliative care available,” surgeon David Nott and chemical weapons expert Hamish de Bretton-Gordon wrote in their Christmas appeal, on behalf of the Union of Medical Care and Relief Organisations.

Both have extensive experience working in Syria, and last year successfully appealed for another ceasefire to evacuate around 500 children from Aleppo, reaching out to Assad and Russia’s Vladimir Putin, a key backer.

They hope to repeat that success, and say they have reached out to both governments. “We now appeal to at least give these seven children a chance of life by getting them to places which can treat their curable cancers,” they wrote.

MP Alison McGovern, who chairs the all-party Friends of Syria group in parliament, called on the government to make the evacuation a priority.