Hezbollah smuggled tons of cocaine Into the U.S. during Obama admin , report 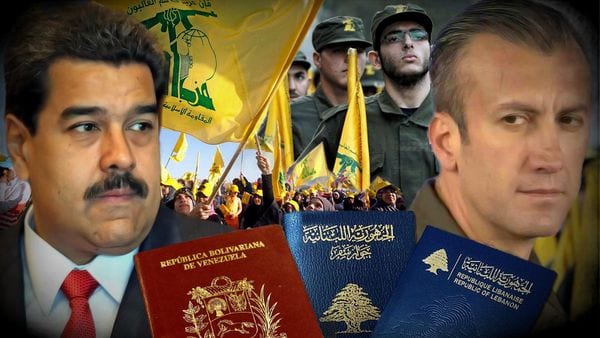 hezbollah flags The Islamist militant group Hezbollah exploded into a major cocaine trafficker for the United States over the past decade—and it happened under former President Barack Obama’s watch to help score a nuclear deal with Iran, a report revealed Monday.

Project Cassandra, a campaign launched by the Drug Enforcement Administration in 2008, found that the Iran-backed military and political organization collected $1 billion a year from money laundering, criminal activities, and drug and weapons trade, according to Politico. Over the following eight years, the agency found that Hezbollah was involved in cocaine shipments from Latin America to West Africa, as well as through Venezuela and Mexico to the United States.

The Obama administration halted Project Cassandra as it was approaching the upper echelons of Hezbollah’s conspiracy in order to seal a nuclear deal with Iran, even though Hezbollah was still funneling cocaine into America. Officials at the U.S. Justice and Treasury departments delayed the project’s requests to conduct relevant investigations, prosecutions and arrests. Obama eventually helped strike the Iran deal with several other nations in 2015.

Because of the project’s sudden end, it is hard to determine how much cocaine has come into the U.S. from Hezbollah-affiliated networks. But through Venezuela alone, Hezbollah sent thousands of tons to the United States in a matter of years.

In the years after the 9/11 attacks, Iran and Hezbollah’s influence in Latin America thrived with the help of populist leaders. Venezuela’s then-President Hugo Chávez worked alongside Iran’s Mahmoud Ahmadinejad and Hezbollah on drug trade and other activities to weaken the U.S. clout in the region. Within a few years, cocaine trafficking from Venezuela to the U.S. soared from 50 tons a year to 250 tons, according to the United Nations Office on Drugs and Crime Statistics.

The findings corroborate that the rise of populism in Latin America was fertile ground for Iran and Hezbollah’s intentions. Earlier this year, the U.S. State Department found that Hezbollah strengthened its relationship with Mexican and Colombian cartels and established operations in Bolivia, Ecuador, Brazil and Venezuela’s island of Margarita.

In February, the Trump administration sanctioned Venezuelan officials, including acting Vice President Tareck El Aissami, due to his alleged role in Hezbollah’s money laundering. El Aissami “facilitated shipments of narcotics from Venezuela … He oversaw or partially owned narcotic shipments of over 1,000 kilograms from Venezuela on multiple occasions, including those with final destinations of Mexico and the United States,” the Treasury Department said.

Hezbollah’s activities in Latin America potentially pose a threat to U.S. national security. “Though U.S. authorities know that Hezbollah’s terror finance operations in Latin America are a growing threat, to date they have not been able to estimate its value accurately,” Emanuele Ottolenghi, a senior fellow at the Foundation for Defense of Democracies, told The Hill.