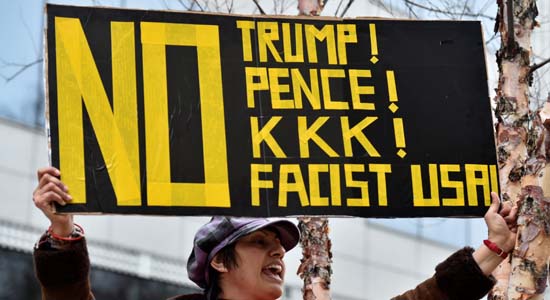 US vice-president Mike Pence’s mission to the Holy Land to defend its shrinking Christian communities has been torpedoed by the refusal of Christian and Muslim prelates and Palestinian leaders to meet him.

The boycott was ignited by outrage over US president Donald Trump’s recognition of Jerusalem as Israel’s capital on December 6th. As this day is celebrated by Christians as the name day of St Nicholas, Mr Trump’s choice of date for his announcement was doubly insulting.

Christian and Muslim Arabs regard East Jerusalem as the occupied capital of a future Palestinian state, a position formally adopted by all 57 Muslim states at last Thursday’s summit in Istanbul. The US alone has recognised Jerusalem as Israel’s capital.

Instead of beginning his tour on Sunday in Jerusalem and Bethlehem as planned, Mr Pence is set to arrive in Cairo next Wednesday for a brief meeting with president Abdel Fattah al-Sisi before flying to Jerusalem to meet Israeli president Reuven Rivlin and prime minister Binyamin Netanyahu and to address Israel’s parliament. An evangelical Christian who urged Mr Trump to make his Jerusalem declaration, Mr Pence will be warmly welcomed by Israelis.

His stay in Cairo was curtailed when he was rebuffed by top Christian and Muslim clerics. Coptic pope Tawadros cancelled an audience with Mr Pence, arguing Mr Trump “did not take into account the feelings of millions of Arab people”. The pope heads the region’s largest Christian community, constituting 10 per cent of Egypt’s 93 million people.

The world’s leading Sunni scholar, Sheikh Ahmed al-Tayeb, asked, “How can I sit with those who granted what they do not own to those who do not deserve it?” – referring to US politicians and Israelis. The sheikh has organised an international conference of senior Muslim and Christian scholars on January 17th and 18th to boost opposition to Mr Trump’s move.

Since Palestinian president Mahmoud Abbas has cut off all contacts with the US due to Mr Trump’s declaration, Mr Pence will not be received by Palestinian Authority figures either.

Fatah Revolutionary Council member Mohamed Lahham warned that if Mr Pence tried to visit East Jerusalem or the West Bank, “we will receive [him] with shoes” – meaning he will be pelted with footwear.

Brandishing Palestinian flags and placards condemning US policy, Christian and Muslim Palestinians held a protest in front of Bethlehem’s Church of the Nativity, the birthplace of Jesus. Christian community leader George Zinasaid that Trump has no right to forget the religious and historical significance of Jerusalem for Christians and Muslims or the holy city’s indigenous inhabitants.

While attending a Christmas tree lighting ceremony in Beit Sahour, a town near Bethlehem, Jerusalem’s Latin patriarch, Emeritus Michel Sabbah, said: “Our oppressors decided to deprive us of the joy of Christmas . . . to offer us war instead of peace.”

Nazareth, the town where Jesus spent his childhood, has cancelled traditional singing and dancing during Christmas celebrations.

The custodian of the Church of the Holy Sepulchre in Jerusalem, Adeeb Joudeh, said he had refused to meet Mr Pence. To prevent sectarian squabbles, two Muslim families, the Joudehs and Nusseibehs, have for centuries held the key to the church, believed to have been built on the site of Jesus’s crucifixion and entombment. Christian officials said Mr Pence had not asked to visit the church.

The religious dimension of Mr Pence’s tour to the Holy Land has been reduced to a visit to the Western Wall, regarded by Jews as their holiest site. The wall is a remnant of the temple erected by Herod the Great on the mount that has long hosted the compound containing the 7th-century Dome of the Rock and 8th-century al-Aqsa mosque, the third holiest site for Muslims.

Last week a multi-faith Bahraini delegation, visiting Jerusalem to promote Palestinian-Israeli dialogue at a time of escalating tensions, was refused access to the compound, shunned by Palestinian officials and prevented by Palestinians from entering Gaza.

Mr Trump has been castigated by other Christian religious figures across the region. Patriarchate Louis Raphael Saki of the Iraqi Chaldean Catholic Church called on Mr Trump to reverse his decision. Damascus-based Melkite Greek Catholic patriarch Joseph Absi and all Christian bishops in Jordan also rejected the move.

Lebanon’s Maronite patriarch Cardinal Bechara al-Rai said Mr Trump’s move “violates international resolutions, defies international and regional will, and is a slap in the face of Palestinians, Levantine Christians, Muslims and all Arabs.”

He rejected Mr Pence’s mission as further foreign intervention in the region. “What destroyed us have been the wars provoked by external agents in Palestine, Iraq and Syria. and now, please spare us the melodrama of westerners asking us what they can do to save Christians.”