MPs slam riots: “Awkar is not Gaza and Lebanese security forces are not Israelis” 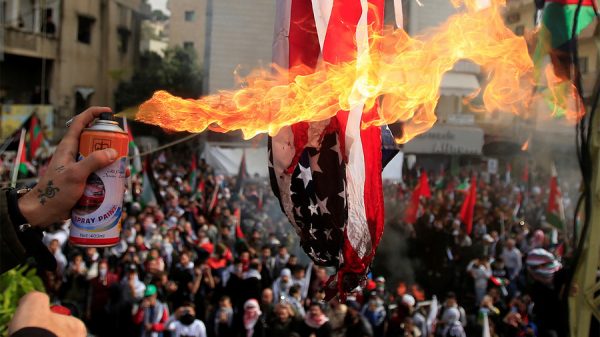 MPs Sami Gemayel, Ibrahim Kanaan and Nabil Nicola who represent Northern Metn district of Mt Lebanon denounced   on Sunday the riots that marred a demo protesting Washington’s decision on Jerusalem near the U.S. embassy in Awkar.

“Awkar is not Gaza and Lebanese security forces are not Israelis”, public properties and citizens’ private properties should not be attack targets,” MP Kanaan,  Change and Reform bloc  secretary said

“We will not sympathize with your cause from now on. The Lebanese Army is not an occupation army; Awkar is a Lebanese Christian town and not an Israeli, Jewish or Zionist town; and the road to Palestine does not pass through any Lebanese city,” MP Nicola of the Change and Reform bloc tweeted.

“You are terrorizing civilian residents and hurling stones at the army that is protecting you,” the lawmaker charged.

Several protesters and policemen were injured after the demonstration turned violent. The protest was organized by a number of leftist and pan-Arabist Lebanese and Palestinian factions.

Security forces intervened forcefully the end of the protest when some protesters refused to leave the site  , chasing the remaining protesters and arresting and beating up a handful of them. Riot police used rubber bullets, tear gas and water cannons to break up the demo.

Kataeb Party chief MP Sami Gemayel meanwhile said that “allowing the turning of the Akwar area into an arena for some rioters to attack the Lebanese Army and this peaceful area and its residents and shops shames this ruling class, which only flexes its muscles against those who defend Lebanon.”

Demonstrators were blocked from reaching the embassy complex by a metal gate . The gate was installed hundreds of meters away from the embassy compound and was partially destroyed by protesters.