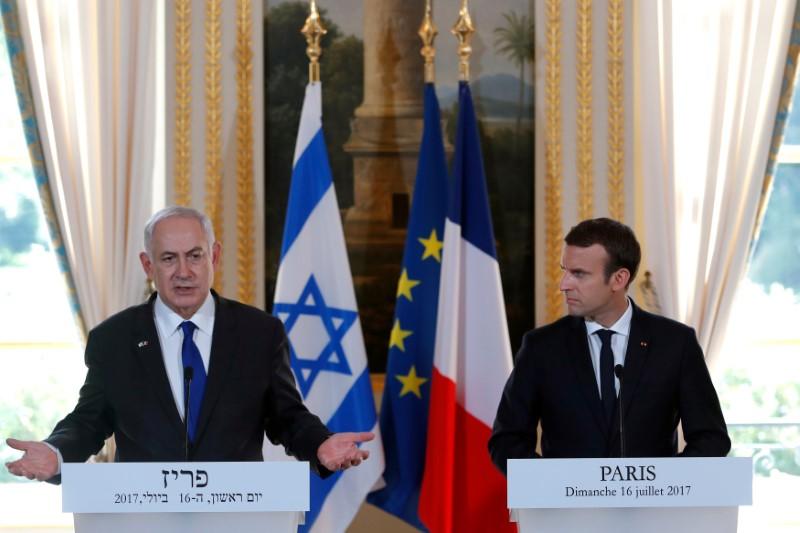 French President Emmanuel Macron and Israeli Prime Minister Benjamin Netanyahu attend a news conference to make a joint declaration at the Elysee Palace in Paris, France, July 16, 2017. REUTERS/Stephane Mahe
Share:
Israeli Prime Minister Benjamin Netanyahu began a trip to Europe on Sunday facing widespread criticism of the US decision to recognise Jerusalem as the capital of the Jewish state and pressure to engage in the peace process.

In his first meeting with French President Emmanuel Macron, he was urged to re-engage with the Palestinians to build goodwill following widespread protests over the capital move.

Speaking alongside Netanyahu after a working lunch, Macron again condemned the unilateral decision on Jerusalem last week by US President Donald Trump as “contrary to international law and dangerous for the peace process.”

“I urged the prime minister to show courage in his dealings with the Palestinians to get us out of the current dead-end,” Macron said after talks in Paris with the Israeli leader.

“Peace does not depend on the United States alone…it depends on the capacity of the two Israeli and Palestinian leaders to do so,” the French leader said.

Echoing a message that European foreign ministers are set to carry during further talks in Brussels on Monday, Macron also urged him to freeze Israeli settlement building in the occupied territories.

Netanyahu has praised Trump’s decision as “historic” and he explained Sunday that Jerusalem “has always been our capital and it has never been the capital of any other people.”

“The sooner the Palestinians come to grips with this reality, the sooner we’ll move toward peace.”

Before leaving Israel, Netanyahu had taken aim at what he called Europe’s “hypocrisy”, for condemning Trump’s statement, but not “the rockets fired at Israel or the terrible incitement against it.”

Pointedly, Macron began his pre-prepared remarks with a clear condemnation “with the greatest of clarity of all forms of attacks in the last hours and days against Israel.”

Despite the obvious differences between the 39-year-old French leader and the Israeli hardliner, there were also attempts to show they had developed a good early working relationship and held common views.

“Does this mean Emmanuel Macron and me agree on everything? No, not all of it, but we’re working it,” Netanyahu said at one point, joking later: “The lunch in the Elysee is superb, the conversation is superb too.”

The two countries are keen to reset ties after often difficult exchanges under ex-president Francois Hollande.

No French initiative, for now

Netanyahu travels to Brussels on Monday where he is expected to hold informal talks over breakfast with Europe’s foreign ministers who will also pressure him over the moribund peace process.

The EU’s diplomatic chief warned on Thursday that the US decision on Jerusalem “has the potential to send us backwards to even darker times than the ones we’re already living in.”

Trump’s announcement on Wednesday has been followed by days of protests and clashes in the Palestinian territories.

Four Palestinians were killed either in clashes or from Israeli air strikes in retaliation for rockets fired from the Gaza Strip.

Tens of thousands have also protested in Muslim and Arab countries, including Jordan, Turkey, Pakistan and Malaysia.

Further protests were held in Lebanon, Indonesia, Egypt and the Palestinian territories on Sunday.

Macron was also asked if France would attempt to launch another peace initiative to resolve the Israeli-Palestinian conflict following failed efforts in the past.

“There’s a desire by the Americans to mediate which remains and I don’t want to condemn it ab initio (from the beginning),” he said. “We need to wait for the next few weeks, the next months to see what will be proposed.

“And I think we have to wait to see whether the interested parties accept it or not.”

Netanyahu was an outspoken critic of efforts by former French president Francois Hollande to push a Middle East peace process.