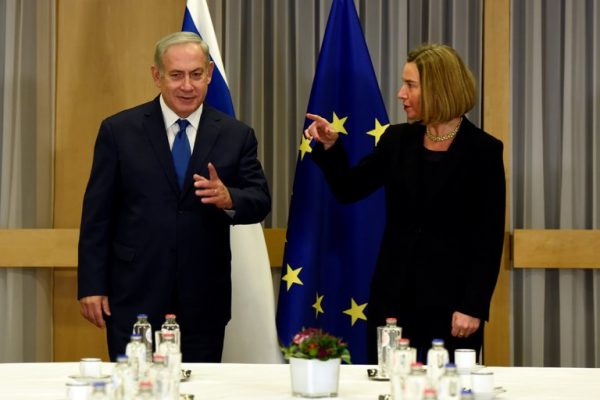 Emboldened by President Trump’s recognition of Jerusalem as his nation’s capital, Benjamin Netanyahu paid the first visit to the European Union headquarters by an Israeli prime minister in 22 years on Monday, to seek similar endorsement from the 28-nation bloc.

The answer, though, was clear: no.

The bloc’s members are not unified in their attitudes toward Israel, but the European Union’s official position is that it supports what Federica Mogherini, its foreign policy chief, called the “international consensus” from which Mr. Trump departed last week when he announced a reversal of decades of American diplomacy.

The European Union, she said, remains committed to a two-state settlement for the Israelis and the Palestinians, with “Jerusalem as the capital of both.” The bloc is the biggest provider of aid to the Palestinians.

Both Mr. Netanyahu and European officials referred to White House plans to begin a new effort for peace in the Middle East that is being led by Trump’s advisers including his son-in-law and senior aide, Jared Kushner. The Israeli leader also expressed optimism that other countries would follow the American move on Jerusalem.

“I believe that all, or most, of the European countries will move their embassies to Jerusalem, recognize Jerusalem as Israel’s capital and engage robustly with us for security, prosperity and peace,” Mr. Netanyahu said.

Mr. Netanyahu met on Sunday with President Emmanuel Macron of France in Paris, here he received a taste of what was to come, before flying on to Brussels. France said the status of Jerusalem could only be worked out in a final settlement between Israelis and Palestinians to their decades-old disputes.

After meeting with European Union foreign ministers, Mr. Netanyahu said in a statement that recognition of Jerusalem as Israel’s capital “doesn’t obviate peace, it makes peace possible, because recognizing reality is the substance of peace, it’s the foundation of peace.”

Mr. Trump’s move last week ignited protests in many parts of the Islamic world and led to airstrikes on Gaza after Palestinian militants there lobbed missiles into Israel. Mr. Netanyahu castigated the European Union over the weekend for what he said was its “hypocrisy” in criticizing Mr. Trump but not the rocket attacks or incitement against Israel.

Ms. Mogherini said she wished to “condemn in the strongest possible way all attacks on Jews everywhere in the world, including in Europe and on Israel and on Israeli citizens.”

Among the European Union members, several smaller countries — including Hungary and the Czech Republic — favor a closer bond with Israel. Last week, the Czech Republic said it would consider moving its embassy from Tel Aviv to Jerusalem but then seemed to retreat, saying it accepted Israel’s sovereignty over only the western part of Jerusalem.

“I am convinced that is it impossible to ease tension with a unilateral solution,” Mr. Zaoralek said, according to Reuters, as he and other European foreign ministers gathered for breakfast with Mr. Netanyahu. “We are talking about an Israeli state, but at the same time a Palestinian state.”

The French foreign minister, Jean-Yves Le Drian said the Europeans had been waiting several months for the new American plan, and were growing weary of waiting. “If one is not forthcoming,” he said, “the European Union will have to take the initiative.”

Some Israelis, who see a pro-Palestinian bias among many Europeans, have been angered by European moves such as requiring that goods from Israeli settlements in the West Bank be clearly labeled with their provenance. Additionally, many European countries have been seeking closer ties with Iran since it reached a nuclear deal with the United States and other powers.