Christian leaders in Jerusalem warn Trump, say his decision will cause ‘explosion’ in Arab states 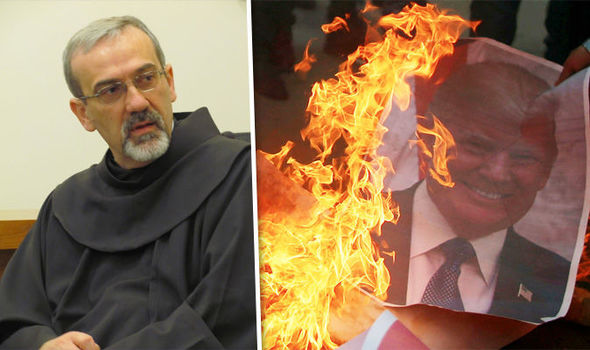 Archbishop Pizzaballa (L) has warned Trump his policy could result in conflicts across the Middle East
Share:

Archbishop Pierbattista Pizzaballa, Apostolic Administrator of the Latin Patriarchate of Jerusalem, has spoken out against Trump’s decision to recognise Jerusalem as the Israeli capital after days of conflict in the West Bank.

A Palestinian man was killed by Israeli troops earlier today as tensions flared close to the Gaza border.

Thousands of Palestinians have been demonstrating on a “day of rage”, while Israeli soldiers have responded with live bullets and teargas.

Now, Archbishop Pizzaballa has issued a major warning about how the unrest could spread throughout the Middle East.

He told Catholic charity Aid to the Church in Need: “I think that this will create a big problem, an explosion in all of the Arab countries especially the Muslim countries.

“Jerusalem should be at the end of these negotiations, not the beginning.“And any unilateral decision will create more frustration, and anger and I’m afraid will bring to more violence. I don’t think it is wise to do it in this way.”He demanded an “inclusive approach” to Jerusalem because of the city’s importance to a number of different faiths.
He said: “Jerusalem is the holy city for all. It is the heart of the life of the Faith.“If you do not understand that in the Middle East – for Arab countries and Israel too, they are religious, that the religious element is part of their identity – you don’t understand the Middle East.

“And in this religious identity Jerusalem is central.

“As long as the religious community doesn’t have an inclusive approach it will be almost impossible to compromise on Jerusalem.”

Trump’s decision has enraged Palestine and prompted fury across the world
Archbishop Pizzaballa has also joined other Christian leaders in Jerusalem in writing a letter to Trump to warn him of the potential consequences of the decision to relocate the US Embassy.The letter stated: “We are certain that such steps will yield increased hatred, conflict, violence and suffering in Jerusalem and the Holy Land, moving us farther from the goal of unity and deeper toward destructive division.”

Trump’s announcement unravelled years of work to establish peace in the Middle East and sparked warnings from Hamas about possible uprisings against Israel.

Spontaneous protests broke out in the hours after Trump’s speech and despite the deployment of thousands of Israeli troops there are few signs that tensions will subside quickly.

The Islamist group said Trump had “opened the gates of hell” with his “flagrant aggression” while Turkey strongly condemned the move.A host of US allies have condemned the move and vowed not to follow the US in recognising Jerusalem as the Israeli capital.

France’s Emmanuel Macron, Germany’s Angela Merkel and Britain’s Theresa May have all condemned the move, with the after branding Trump’s announcement “unhelpful”.

Meanwhile, Turkish president Erdogan and Pope Francis have together agreed to avoid any changes to Jerusalem’s status.