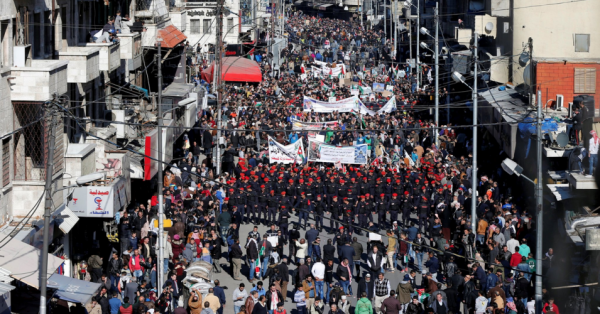 Protests have broken out across the Middle East as the international community has denounced President Donald Trump’s decision to move the U.S. embassy in Israel from Tel Aviv to Jerusalem and recognize Jerusalem as Israel’s capitol. (Photo: @ajplus/Twitter)
Share:

In a petition released Thursday — just days after Trump’s declaration — more than 110 signatories from universities and colleges around the country called on Trump to rescind the declaration.

“We write as Jewish Studies scholars to express our dismay at the Trump administration’s decision to reverse decades of bipartisan U.S. policy by declaring Jerusalem the capital of Israel, and authorizing the relocation of the U.S. embassy from Tel Aviv,” the petition reads.

“A declaration from the United States government that appears to endorse sole Jewish proprietorship over Jerusalem adds insult to ongoing injury and is practically guaranteed to fan the flames of violence.”

The petition, which links to the Israeli human rights advocacy group  B’Tselem, accuses the Israeli government of perpetrating “systematic inequalities” against the Palestinian people.

“Palestinian residents of Jerusalem endure systematic inequalities, including an inequitable distribution of the city’s budget and municipal services, routine denial of building permits that are granted to Jewish residents, home demolitions, and legal confiscation of property for Jewish settlement,” the petition argues.

“In addition, Palestinians in the West Bank, unlike Jewish Israelis resident in that territory, require a special permit to visit Jerusalem’s holy sites,” it adds.

In an event at the White House on Wednesday, Trump said that declaring Jerusalem as Israel’s recognized capital was “the right thing to do.”

“This is nothing more or less than a recognition of reality. It’s also the right thing to do. It’s something that has to be done,” Trump said.

Trump also announced a plan to move the U.S. Embassy from Tel Avis to Jerusalem.

The decisions have sparked criticism from Arab leaders and violence in Gaza.