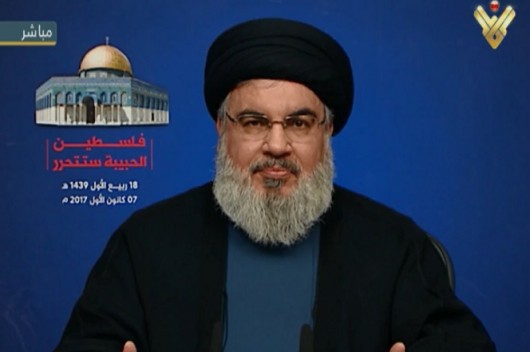 Hezbollah chief Hassan Nasrallah blasted  US President Donald Trump’s recognition of Jerusalem (al-Quds)  as Israel’s capital calling the move an  ” insult to all Muslims and a violation of international law.

He branded  Trump’s decision on Jerusalem as the “second Balfour Declaration” .

“All Palestinians agree that East Jerusalem should be the capital of their state and today the U.S. has rejected this although it is the guarantor of the agreements.”

Nasrallah said that  with this move Trump  is saying  the Palestinian cause has ended .

Nasrallah warned that with this move the holy sites are in danger .

He called for a Palestinian uprising( Intifada )

The most important response would be a Palestinian uprising( Intifada )  and an Islamic summit that would declare Jerusalem as the eternal capital of Palestine.

He also called for summoning U.S. ambassadors in Arab and Islamic states to protest Trump’s move and for severing “public and secret” Arab ties with Israel.

He also called for a “huge popular rally” on Monday in Beirut’s southern suburbs to condemn what he described as “the U.S. aggression.”