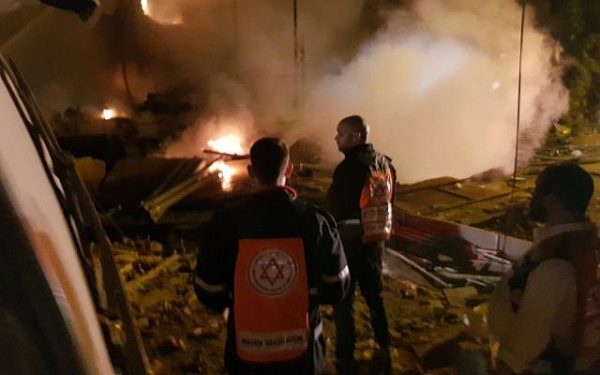 Medics at the site of an explosion and building collapse in Jaffa on November 27, 2017 (Magen David Adom)
Share:

JERUSALEM — Israeli police say an explosion in the port city of Jaffa killed three people and led to the collapse of a building.

Police spokesman Micky Rosenfeld says Tuesday an investigation is under way to discover the cause of the large explosion late Monday. He says an emergency team discovered three people dead under the rubble. Five others were taken to a hospital.

Local media reports say the explosion look place at a store for construction material in the Ajami neighborhood of Jaffa, south of Tel Aviv, and was likely caused by an electrical short and gas leak. Local residents described a huge blast that led to initial fears of a militant attack. Large plumes of smoke billowed above the neighborhood before firefighters put out the blaze.