Israel, US trying to prevent publishing of UN settlement ‘blacklist’ 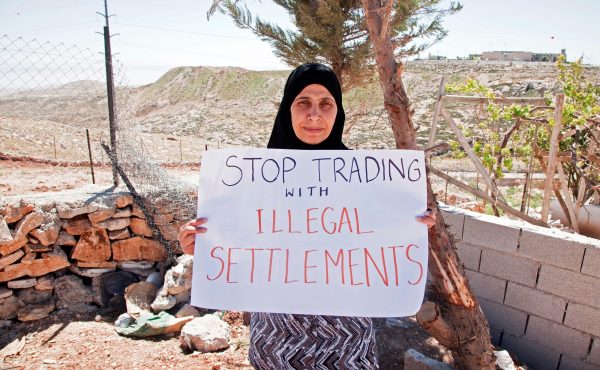 The United Nations Human Rights Council adopted a draft resolution proposed by the Palestinian Authority, Arab states to form a blacklist of companies that operate in settlements. 32 countries voted in favor and 15 abstained. No country voted against.
Share:

Weeks ahead of the expected completion of a U.N. database of companies that operate in Israel’s West Bank settlements, Israel and the Trump administration are working feverishly to prevent its publication.

While Israel is usually quick to brush off U.N. criticism, officials say they are taking the so-called “blacklist” seriously, fearing its publication could have devastating consequences by driving companies away, deterring others from coming and prompting investors to dump shares of Israeli firms.

Dozens of major Israeli companies, as well as multinationals that do business in Israel, are expected to appear on the list.

“We will do everything we can to ensure that this list does not see the light of day,” Israel’s U.N. ambassador, Danny Danon, told The Associated Press.

The U.N.’s top human rights body, the Human Rights Council, ordered the compilation of the database in March 2016, calling on U.N. rights chief Zeid Ra’ad al-Hussein to “investigate the implications of the Israeli settlements on Palestinians.”

The international community overwhelmingly considers the settlements, built on occupied land claimed by the Palestinians for a future state, to be illegal. Israel rejects such claims, citing the land’s strategic and religious significance, and says the matter should be resolved in negotiations.

Israeli officials say that about 100 local companies that operate in the West Bank and east Jerusalem have received warning letters that they will be on the list. In addition, some 50 international companies, mostly American and European, also have been warned.

The companies have not been publicly identified, but one official said they include Israeli banks, supermarkets, restaurant chains, bus lines and security firms, as well as international giants that provide equipment or services used to build or maintain settlements. He spoke on condition of anonymity because he was not authorized to discuss the matter with the media.

The only company to confirm receiving a warning letter has been Bezeq, Israel’s national telephone company. Bezeq’s chief executive, Stella Handler, posted a copy of the letter sent by Zeid’s office in September on her Facebook page. It accused Bezeq of using West Bank land for infrastructure, providing phone and Internet services to settlements and operating sales offices in the West Bank and east Jerusalem.

Handler angrily wrote that Bezeq provides service to all customers, regardless of race or where they live.

“The council’s bias against Israel is so extreme that it has lost all relevance in the world,” she wrote. “We will not cooperate with a move that is all in all anti-Israeli propaganda.”

But hours later, Handler removed the post, saying she had done so at the request of the government. The Israeli official confirmed the government has asked companies not to speak about the issue. Bezeq declined comment.

Israel has long accused the United Nations, and particularly the rights council, of being biased against it.

Israel is the only country that faces an examination of its rights record at each of the council’s three sessions each year. Some 70 resolutions, or about quarter of the council’s country-specific resolutions, have been aimed at Israel. That is nearly triple the number for the second-place country: Syria, where hundreds of thousands have been killed in a devastating six-year civil war.

Israeli leaders and many non-governmental groups also complain that some of the world’s worst violators of human rights, including Venezuela, Saudi Arabia, Congo and Cuba, sit on the council.

Some Western diplomats have said the database could set a harmful precedent by blurring the line between business and human rights on issues that are better left to trade policy than the Geneva council.

Israel seems to have little leverage over the council. But its campaign has received a big boost from the United States. The Trump administration has taken a tough line against the U.N., demanding reforms and in October, withdrawing from the cultural agency UNESCO because of alleged anti-Israel bias.

In a speech to the council last June, U.S. Ambassador Nikki Haley railed against its makeup and demanded that Israel be removed as a permanent fixture on its agenda. She also hinted that the U.S. could quit the council.

The upcoming release of the database could test that commitment. It has triggered a quiet, but high-stakes effort by Israel and the U.S. to try to block its release.

Danon, the Israeli ambassador, accused the council of unfairly targeting Israel at a time of conflict throughout the world, saying it amounted to a “blacklist” of Jewish companies and those who do business with the Jewish state.

He also said it would turn the rights council into “the world’s biggest promoter of BDS,” an acronym for the Boycott, Divestment and Sanctions Movement — a grassroots international boycott movement against Israel. Most of the companies linked to the blacklist are frequent targets of the BDS movement.

“What kind of message will this send?” Dannon said.

But Nabil Shaath, a senior Palestinian official, said the list is an “important step” moving from verbal condemnation to practical action against the settlements. He expressed hope that it would lead companies to stop doing business with the settlements and even lead to sanctions against those that continue.

The original resolution calling for the list stipulates only that the council’s high commissioner is requested “to transmit the data therein in the form of a report” to the council.

To that end, Israel and its allies have been encouraging the council to leave the list out and submit only a basic, broad-strokes report that doesn’t name names, according to several U.N. diplomats familiar with the discussions. The diplomats were not authorized to comment publicly and demanded anonymity.

The pressure campaign has shown some signs of success. After an earlier delay, Zeid’s office said the release of the “report” has been pushed back again, from December to early next year.

For now, it does not appear that the list’s publication would be the direct trigger that leads the U.S. to quit the council. Haley’s office said it is focused on implementing reforms on the council, though publication of the list could make U.S. participation “less likely.”

Eugene Kontorovich, the director of international law at the Kohelet Policy Forum, a conservative think tank in Jerusalem, said he was “deeply skeptical” the report will not be published and said the Israeli government would be better off trying to discredit the report ahead of time. “I think it’s important for people to understand how bad this is,” he said.

The resolution, he warned, would cause “reputational harm” to companies and put “a cloud over business in Israel.” Although nonbinding, he said it could be used as a basis for future legal action. “The goal of this is to cause problems for Israel,” he said.