At least 127 people, including 30 children killed in Government airstrikes near Damascus 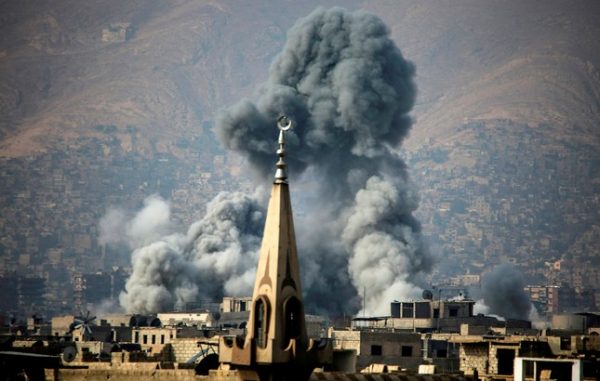 A picture taken on November 23, 2017 shows smoke rising following a reported air strike on the moderate opposition-held besieged town of Arbin, in the Eastern Ghouta region on the outskirts of Damascus. (AFP Photo)
Share:

An intensifying push by the Syrian government and allied forces to take the last major rebel stronghold near the capital Damascus killed at least 23 people on Sunday and injured many, the Syrian Observatory for Human Rights said.

The group said at least 127 people, including 30 children, have been killed by air strikes and shelling since the Syrian army backed by Russian jets began an offensive nearly two weeks ago to take the besieged rebel-held Eastern Ghouta area.

Eastern Ghouta is one of several “de-escalation” zones across western Syria, where Russia has brokered deals to ease the fighting between rebels and President Bashar al-Assad’s government.

A Reuters witness said there had been drones in the sky since Sunday morning and warplanes had heavily bombarded the towns of Mesraba and Harasta. Heavy shelling also hit Eastern Ghouta and dozens had been injured.

Assad’s forces have besieged Eastern Ghouta since 2012 and the area is suffering a humanitarian crisis.

A wounded boy is seen lying in a hospital in Douma after an airstrike on the rebel-held town of Mesraba, in the rebel-held besieged town of Douma, eastern Ghouta in Damascus, Syria, November 26, 2017. REUTERS/Bassam Khabieh

Ghouta residents are so short of food that they are eating trash, fainting from hunger and forcing their children to eat on alternate days, the U.N. World Food Programme said in a report this week.

The opposition Eastern Ghouta Damascus Countryside local council said this week the escalating bombardment was forcing people to seek shelter in unsuitable and unsanitary places which it feared could lead to disease outbreaks.

A number of shells from the rebel enclave have hit government-held Damascus in the past two weeks.

Syria’s six-year-old civil war has killed hundreds of thousands of people and forced millions to flee in the worst refugee crisis since World War Two.

U.N.-backed peace negotiations are due to begin in Geneva on Nov. 28. Several previous rounds of Geneva talks have failed to agree a political transition for Syria or a way to stop the violence.

Yahya Aridi, spokesman for the Syrian opposition Geneva delegation, said on Sunday it was now time for the Syrian government and the opposition to “get to the table and start talking about transition, from dictatorship to freedom” in Geneva.