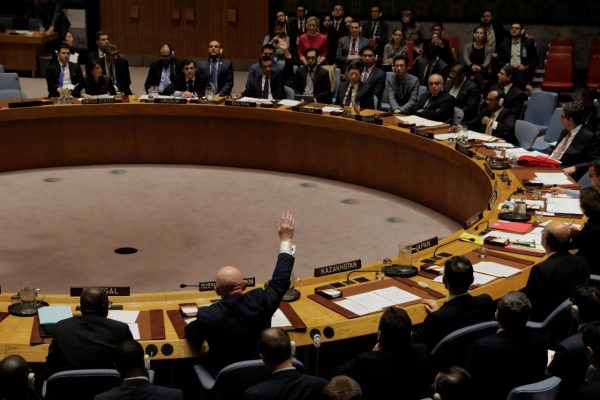 Representatives of Russia and Bolivia vote in the United Nations (UN) Security Council on a bid to renew an international inquiry into chemical weapons attacks in Syria during a meeting at the UN headquarters in New York, U.S., November 16, 2017. REUTERS/Lucas Jackson
Share:

Russia cast its 10th veto on Thursday of United Nations Security Council action on Syria since the war began in 2011, blocking a U.S.-drafted resolution to renew an international inquiry into who is to blame for chemical weapons attacks in Syria.

The mandate for the joint inquiry by the U.N. and the Organization for the Prohibition of Chemical Weapons (OPCW), which found the Syrian government used the banned nerve agent sarin in an April 4 attack, expires at midnight Thursday.

A resolution needs nine votes in favor and no vetoes by the United States, France, Russia, Britain or China to be adopted. Russia withdrew its rival draft resolution to renew the inquiry shortly before the council vote on the U.S. draft.

The Russian  veto comes   after U.S. President Donald Trump urged  earlier  Thursday  all members of the U.N. Security Council to back the renewal of the international inquiry into chemical weapons attacks in Syria, saying it was needed to prevent President Bashar al-Assad from using the arms.

“Need all on the UN Security Council to vote to renew the Joint Investigative Mechanism for Syria to ensure that Assad Regime does not commit mass murder with chemical weapons ever again,” Trump said in a note on Twitter.