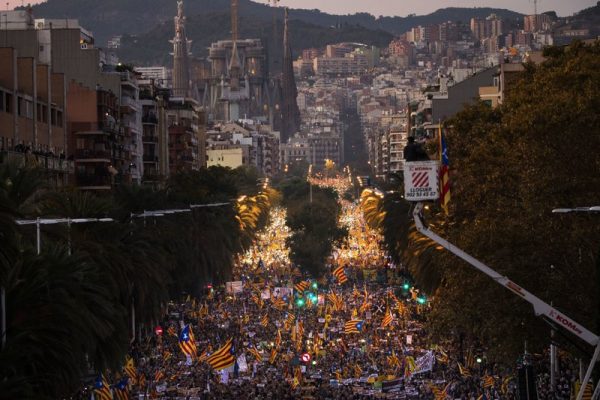 Hundreds of thousands of people backing Catalonia’s bid to secede from Spain packed the streets in downtown Barcelona Saturday to demand the release of jailed separatist leaders.
Share:

BARCELONA, Spain – Hundreds of thousands of people backing Catalonia’s bid to secede from Spain packed the streets in downtown Barcelona Saturday to demand the release of jailed separatist leaders.

The rally’s grassroots organizers called for 10 prominent members of the secessionist movement in the northeastern Spanish region to be freed from prison.

Eight former members of Catalonia’s dissolved Cabinet and two activists are in jail while Spanish authorities investigate their alleged roles in promoting an illegal declaration of independence last month in violation of Spain’s Constitution.

A separate court in Madrid granted bail on Thursday to another six Catalan lawmakers also being investigated over the secession push.

“We want to tell the world that we want freedom for our prisoners and freedom for Catalonia,” Agusti Alcoberro, the vice president of grassroots group National Catalan Assembly, told the crowd in Barcelona, the region’s capital.

Many of the protesters carried pro-independence “estelada” flags, with its white star and blue triangle superimposed over the traditional red-and-yellow Catalan colors. Many also held signs saying in Catalan “Freedom Political Prisoners” and wore yellow ribbons as a symbol of their demands.

“They (Spanish authorities) are violating many rights of freedom against our people and we come here to say that we are against that and to demand the release of our prisoners who are in prison unjustly,” said 30-year-old engineer Joan Carles Roses.

Family members of the jailed separatists read messages from their loved ones to the crowd at the conclusion of the march.

Also on Saturday, the pro-independence Republic Left party announced that its jailed leader Oriol Junqueras will be its top candidate for the upcoming regional elections on Dec. 21. The Catalan party is including other jailed leaders in its list for the regional parliament. Polls show that Republic Left is favored to win the upcoming ballot, although it won’t secure an outright majority.

The Catalan conflict is the worst constitutional crisis to threaten Spain in nearly four decades.

A day after Catalonia’s Parliament voted in favor of a declaration of independence on Oct. 27, Spain’s government activated extraordinary powers given to it by the Senate to fire the region’s government, dissolve its parliament and call local elections.

While those separatist leaders now in jail obeyed a summons to appear in court in Madrid, deposed Catalan president Carles Puigdemont and four of his former ministers fled to Belgium, where they now await an extradition hearing to return them to Spain.

Addressing the rally in Barcelona via a video message shown on a large screen, Puigdemont said: “We need you all to be very active. We want to hear your voice, both those of us in Brussels and those in prison.”

Puigdemont and his fellow separatists claim that a referendum on secession held on Oct. 1 gave them a mandate for independence, even though it had been prohibited by the nation’s highest court, failed to meet international standards and was boycotted by anti-independence parties. Less than half of the electorate turned out to vote, and the referendum was also disrupted by brutal police raids.

No foreign power has recognized Catalonia’s claim to independence. The European Union has warned that an independent Catalonia would be cast out of the 28-nation bloc.

The most recent regional elections and opinion polls show that Catalonia’s 7.5 million residents are roughly split over remaining a part of Spain or going their own way. Most pro-independence supporters feel that the Catalan language and culture would have a better chance of flourishing in a separate state and that their economic prospects would be improved.

The business sector has so far not been convinced, with over 2,000 companies transferring their headquarters out of the northeastern region in recent weeks for fears of being pushed out of the common EU market.

The Spanish Constitution says the nation is “indivisible” and that questions of national sovereignty should be addressed by the national Parliament in Madrid.