Nasrallah: Saudi Arabia had declared war on Lebanon and Hezbollah 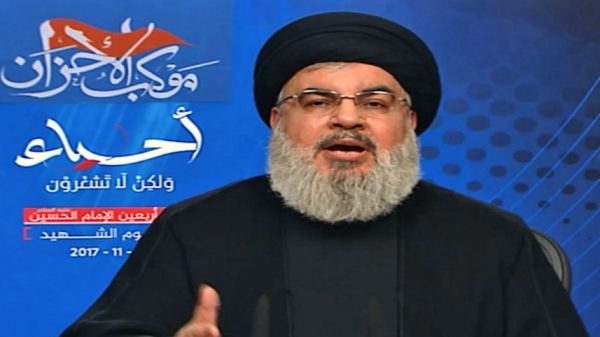 Hezbollah leader  Hassan Nasrallah said on Friday Saudi Arabia had declared war on Lebanon and Hezbollah, and said Lebanese Prime Minister Saad Hariri, who resigned in a speech from Riyadh on Saturday, was being detained in Saudi.

In a televised address Nasrallah said  Hariri’s resignation was an “unprecedented Saudi intervention” in Lebanese politics and called for Mr Hariri to return to Lebanon. He said Lebanon’s government was still legitimate and had not resigned.

Nasrallah said war with Israel was unlikely amid the crisis facing his country. He said his  militant group is watching carefully for any Israeli attempts to use the crisis to begin hostilities against Lebanon. Nasrallah said Israel was cautious and unlikely to make such a move.

Nasrallah is calming an apparently jittery population following Saudi Arabia’s escalation against Hezbollah’s patron Iran. The resignation of Prime Minister Saad Hariri from Saudi Arabia last week was seen as a move by Riyadh to take its rivalry with Iran to the tiny Lebanon.

Many fear the escalation will pave the way for Israel to strike against Hezbollah, against which Israel has fought a number of wars. Mr Nasrallah warned Israel against “miscalculation” or “taking advantage of the situation.”

He said Israel should not think “we are troubled. No, absolutely not.”

“Today we are more confident and feeling stronger in the face of any threat,” said Nasrallah.

His speech comes a day after Saudi Arabia, the United Arab Emirates and Kuwait  advised their citizens not to travel to Lebanon and urged those who are in the country to leave as soon as possible.

“Due to the situations in the Republic of Lebanon, the official source at the Ministry of Foreign Affairs stated that the Saudi nationals visiting or residing in Lebanon are asked to leave the country as soon as possible.

Bahrain – an ally of Saudi Arabia – had already ordered its citizens to leave Lebanon on Sunday, with the Bahraini foreign ministry issuing a travel advisory that cited “safety considerations”.

In his November 4 resignation, Hariri implicitly blamed Iran and its Lebanese ally, Hezbollah, for his decision. In his speech, he said that he suspected there were plans to target his life.

His father, Rafik Hariri – who also served as prime minister – was killed in a bomb attack in 2005. Many of Hariri’s supporters blamed the bombing on Hezbollah. 5 Hezbollah operatives were indicted in Hariri’s murder and are being tried by the UN backed Special Tribunal for Lebanon STL .

In his address from Riyadh, Saad al-Hariri said Iran planted “disorder and destruction” in the country and meddled in the internal issues of Lebanon as well as other Arab countries.
“They have built a state within a state,” Hariri said from Riyadh.

His unexpected move also stoked fears of an escalationin the regional divide between Iran and the Gulf states, primarily Saudi Arabia, with Lebanon on the front lines.

Thamer al-Sabhan, the Saudi minister for Gulf affairs, said on Monday that Lebanon’s government would “be dealt with as a government declaring war on Saudi Arabia” because of what he described as “acts of aggression” committed by Hezbollah.

In an interview with Al Arabiya, Sabhan said Hezbollah was involved in every “terrorist act” that threatened Saudi Arabia.

Minister Sabhan,, asked yesterday in an interview :  “How can anyone  believe that PM   Saad al-Hariri is under house arrest. He received the reception of  heads of state  at Al-Yamamah Palace by the Custodian of the Two Holy Mosques King Salman bin Abd Allah Aziz?”

Al-Sabhan  also said that Saudi Arabia is the country of Saad Hariri and the next few days will prove the false allegations made by Hezbollah axis that Saad Hariri is under house arrest or has been forced to resign.

Following his resignation last Saturday  he has been busy traveling outside Saudi Arabia and meeting with foreign envoys according to his Beirut office.  Last Monday he traveled to Abu Dhabi to meet with the Crown Prince, and the last couple of days he has been  meeting with ambassadors of major Western countries .

Future Movement MP Oqab Saqr stressed on Thursday that PM Hariri has not returned to Lebanon so far due to security reasons and is waiting for the appropriate political moment.

Hariri resigned last Saturday a day after the adviser to the Supreme Leader of Iran, Ali Akbar Velayati met with him at his office in Grand Serai.

During the meeting he reportedly threatened Hariri and warned him that he will meet the fate of his father if he did not implement what Tehran demanded in support of Hezbollah.