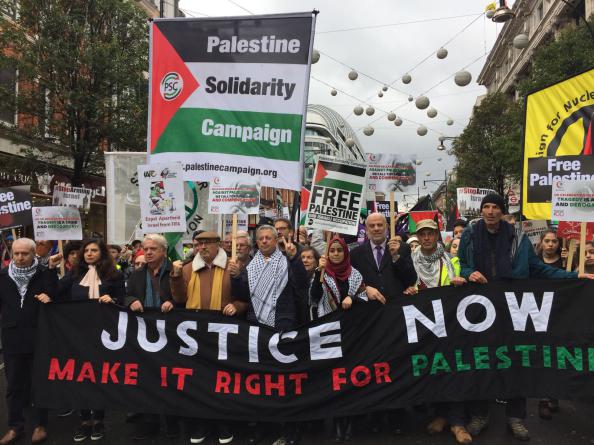 Thousands of protesters came together in London on Saturday to condemn the British government’s celebration of the centenary of the Balfour Declaration as well as its warm welcome to Israeli Prime Minister Benjamin Netanyahu.

Protesters responded to the call of organisers namely; the Palestinian Forum of Britain (PFB), the Palestinian Solidarity Campaign (PSC), Friends of Al-Aqsa (FOA) and the Muslim Association of Britain (MAB) as well as the “Stop The War” coalition for a march of condemnation.

Chair of the PFB, Hafez Al-Karmi commended the response from the British public through the large turnout which denounced the decision of actions of Britain’s Prime Minister Theresa May to “proudly” celebrate the Balfour Declaration and establishment of the Israeli settler-colonial state.

The march which started from outside the US embassy proceeded through London’s busiest streets, passing by Downing Street and ended at Parliament Square.

Tens of Pro-Israel supporters attempted to obstruct the march but the heavy police presence prevented any clashes and ensured the safety of the protesters.

The marchers listened to speeches from a number of Palestinian and British personalities both in front of the US embassy and Parliament Square. Many union leaders as well as politicians and community leaders from the British, Jewish, Muslim, and Palestinian communities were present.

Mustafa Barghouti, chair of the Palestinian National Initiative in Palestine was among the speakers at the march. Other speakers included the Palestinian ambassador to the UK, as well as representatives of Palestinian youth organisations in the UK such as Maisara Al-Arabeed from PFB and Yahya Abu Seido from Olive. Marchers also received a recorded message from the leader of the opposition Labour Party Jeremy Corbyn; he reaffirmed his support for the unfulfilled Palestinian rights mentioned that the Balfour Declaration, noting that it cannot be celebrated by the UK unless a Palestinian state is founded.

Adnan Hmidan, media representative for PFB pointed out that Theresa May’s celebratory comments on the Balfour Declaration not only resulted in a protest and march but also resulted in a turnout beyond all expectation and triggered a huge outcry among protesters, bringing Arab and English communities together in support of Palestinian rights.