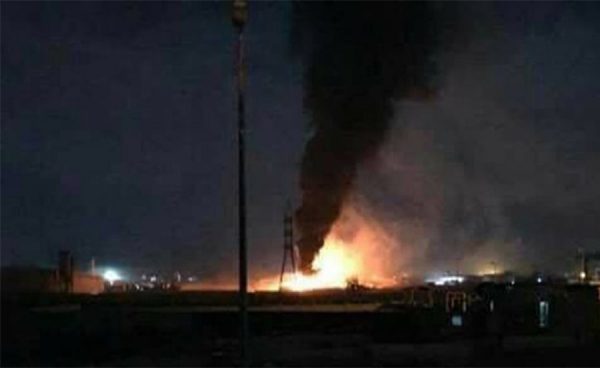 An Israeli air strike targeted a factory south of the Syrian city of Homs on Wednesday and the Syrian army responded by firing a surface-to-air missile at the aircraft, a commander in a military alliance fighting in support of Damascus said.

The commander told Reuters the air strike had hit a copper factory in the industrial town of Hisya, 35 km (21 miles) south of Homs and 112 km (70 miles) north of Damascus. The commander did not give details of any casualties.

The Syrian Observatory for Human Rights, a Britain-based organization that reports on the war, said the air strike had targeted a military installation.

An Israeli military spokeswoman declined to comment. Israel’s Channel 10 said the aircraft were not hit and returned safely to base.

The Israeli air force says it has struck arms convoys of the Syrian military and its Lebanese ally, the Iran-backed Hezbollah, nearly 100 times in recent years.

Israeli officials have expressed alarm at Iranian influence in Syria, where Iran-backed groups have played a critical role fighting in support of President Bashar al-Assad during the conflict that erupted in 2011.

Last month, five projectiles from Syria set off air raid sirens in Israeli towns, prompting the Israeli military to say it would step up its response to stray fire from the Syrian war that has repeatedly spilled over the border.

The Israeli air force attacked a Syrian anti-aircraft battery earlier that week that Israel said had fired a missile at its planes while they were on a reconnaissance mission over neighboring Lebanon.

Tensions between Israel and Hezbollah, which last fought a major conflict in 2006, have escalated this year. Each side has warned it would unleash devastating firepower in the event of a full-scale war.

There are conflicting reports about the airstrike.  Some   Lebanese security  sources reported  that the Israeli aircraft  carried the  attack on targets in Syria from Lebanon’s airspace.

“According to our information, Israeli aircraft carried out a missile strike on the territory of Syria from Lebanon’s airspace in the Beqaa area,” the source was quoted as saying .

Al Mayadin  television station  which is closely associated with Hezbollah reported  that the Israel air attack targeted the Hisya industrial complex in the countryside of Homs and the Syrian army fired one or more anti-air missiles in an attempt to down the Israeli planes. They also described huge explosions heard far away, indicating that the location under attack was a plant, depot or convoy packed with ammunition or weaponry of some kind

No official sources in in  Lebanon have confirmed any of these reports.