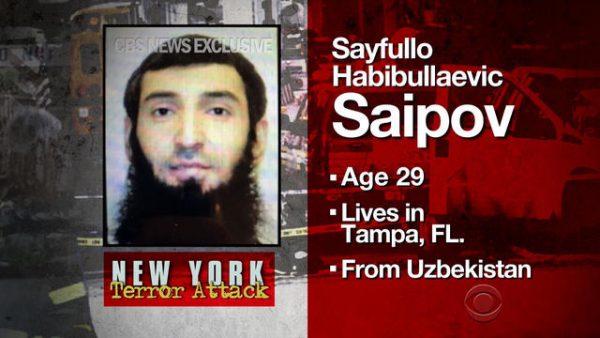 A 29-year-old man driving a rental truck plowed down people on a Manhattan bike path Tuesday in what authorities described as a terrorist attack that killed eight and injured 11 before the suspect was shot and arrested by police.

A sunny fall day along the Hudson River erupted in chaos just around the time students were getting out from nearby Stuyvesant High School, when a rented Home Depot truck turned on to the bike path along the West Side Highway.

Witnesses say the speeding truck struck unsuspecting bicyclists and pedestrians while onlookers screamed and scattered. The truck then veered left toward Chambers Street, where it collided with a small school bus, injuring two adults and two children inside, officials said.

According to a video from the scene, the man then jumped out of the wrecked vehicle brandishing what appeared to be handguns. Some witnesses said he shouted “Allahu akbar’’ meaning “God is great’’ in Arabic.

Law enforcement officials, speaking on the condition of anonymity to discuss an open investigation, identified the suspect as Sayfullo Saipov, an Uzbek immigrant who had been living in Tampa.

The attack could intensify the political debate over immigration and security. President Trump has argued for much tougher screening of immigrants to prevent terrorism, and opponents of those policies have sought to block his efforts in the courts. Uzbekistan was not among the countries named in any version of the president’s travel ban, which largely targeted a number of majority-Muslim countries.

Trump made multiple responses to the attack on Twitter, first saying it “looks like another attack by a very sick and deranged person.’’ He tweeted a short time later: “We must not allow ISIS to return, or enter, our country after defeating them in the Middle East and elsewhere. Enough!” ISIS is an acronym for the Islamic State.  In the evening, Trump would add that he “ordered Homeland Security to step up an already Extreme Vetting Program.”

There was no immediate indication that the attack had been directed by the Islamic State. However, the group has called on its supporters in Western countries to launch their own attacks, using anything at hand as weapons, including vehicles.

The violence was terrifyingly similar to vehicle attacks carried out in Europe, where Islamic State supporters have used cars and trucks to strike pedestrians in crowded streets, a tactic that has been employed in France, Britain, Germany, Sweden and Spain.

“This certainly bears all the hallmarks of an ISIS-inspired or al-Qaeda-inspired attack,” said Rep. Adam B. Schiff (Calif.), the ranking Democrat on the House Intelligence Committee, whom the FBI briefed on the attack Tuesday evening. “We have to expect that as the capital of the caliphate has now fallen, there are going to be increasing efforts to show that they remain dangerous and lethal, and to expand the virtual caliphate. But at this point, we don’t know whether this was an ISIS-directed attack or merely someone acting out of radical inspiration.”

Antonio Valasquez, 28, said he saw the truck speed by as he left a restaurant and then heard a crash. “I didn’t really understand, you know, at first what was happening,” he said. Valasquez said he heard what appeared to be gunshots shortly after but couldn’t be sure. “I was running away.”

An officer from the 1st Precinct approached Saipov and shot him in the abdomen, police said. He has been taken to a hospital, but officials did not discuss his condition or location. The weapons he was brandishing turned out to be a pellet gun and a paintball gun, police said.

Rabbi Chaim Zaklos was picking up about half a dozen children from school to escort them to Hebrew school nearby when he encountered the scene. Police were pushing people away, and he could see abandoned bikes and what appeared to be uprooted trees nearby. “It was obvious something drastic was happening, so I just wanted to get the kids someplace safe,” said Zaklos, 35.

“This is a very painful day in our city,’’ New York City Mayor Bill de Blasio (D) said. “Based on the information we have at this moment, this was an act of terror, a particularly cowardly act of terror aimed at innocent civilians.

Saipov moved to the United States from Uzbekistan about six years ago, said Dilnoza Abdusamatova, 24, who said Saipov stayed with her family in Cincinnati for his first two weeks in the country because their fathers were friends. Some officials said he arrived in 2010.

Abdusamatova said Saipov then moved to Florida to start a trucking company. Her family members think he got married about a year after arriving in the United States and may now have two children. Around that time, she said, he cut off contact with them.

“He stopped talking to us when he got married,” Abdusamatova said.Saipov had lived in an apartment complex, Heritage at Tampa, near the Hillsborough River. On Tuesday evening, two plainclothes investigators were seen departing the community, having interviewed several residents and others in the surrounding neighborhood. The investigators declined to answer any questions.

“Four FBI agents came and told me he used to live here,” said Venessa Jones, who said she lives in an apartment above the one Saipov rented. Neighbors at the complex said they didn’t know Saipov.

Officials said they had no information to suggest that the attacker had any accomplices or that there was a further threat to the city.

Nevertheless, they said, extra police would be posted around the city as a precaution, particularly along the route of the Halloween Parade, a long-standing tradition in Manhattan’s Greenwich Village that attracts big crowds. Officials said sand trucks, police vehicles and other equipment would be used to deter any vehicle attacks at the parade.

The investigation is being led by the FBI with the assistance of the New York Police Department.

“We have recently seen attacks like this one throughout the world,’’ said acting homeland security secretary Elaine Duke. “DHS and its law enforcement partners remain vigilant and committed to safeguarding the American people.’’

Hours after the attack sent New Yorkers running for their lives, hundreds of cheerful Halloween revelers began lining up early to see the annual parade.

Sarah Butler, 24, said she had not heard much about the suspected terrorist attack and felt safe enough with the heavy police presence. “This is my first Halloween here,” said Butler, a film student. “It’s sad. I hope everyone is okay, but we shouldn’t let this ruin everything.”

Ivo Araujo, 72, and a group of about a dozen drummers hammered out a rhythm along Varick Street as they prepared for the parade to begin.

“We heard about it, but what can you do?” he said when asked whether he and his group, Manhattan Samba, had any qualms about making their 27th appearance in the parade. “The cops are going to take care of us. Nothing is going to happen. It’s going to be great.”

Michael Walz, 40, was tapping a snare next to him. Walz lives in Rio de Janeiro as well as New York and said he was used to violent attacks, in part because he was in Barcelona during a vehicle attack earlier this year.

A few blocks from the parade, parents were starting to bring their children home from trick-or-treating. Among them were Marianne Aulie, 46, walking with her daughter and her pumpkin-costumed toddler strapped to her chest.

Aulie had some qualms about heading out after hearing news of the attack shortly before they left the house. She said she generally felt safe with all the police in the area but was still nervous.
She noted that such events are becoming common. “It was unexpected but expected,” she said. “We can’t let fear take us.”

As she spoke, a large truck turned a nearby corner. “When you see a big truck now, you, you know. . . .” She trailed off. A man who was with her pointed out that it was a police bomb squad truck. “Bomb squad!” her daughter chirped.

Inside the rental truck, investigators found a handwritten note in which Saipov had declared his allegiance to the Islamic State, according to officials.

Saipov is expected to survive, meaning investigators will likely have a chance to question him about his motive for the attack, but so far, they said, he appears to have been a “lone wolf’’ suspect – someone who acted alone after being inspired, but not directly instructed, by the Islamic State.

He had been living in Paterson, New Jersey before the attack, and rented the vehicle in that state before driving it into Manhattan, officials said.