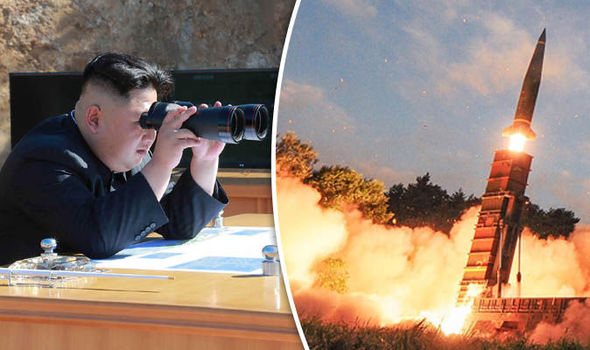 Scientists from Beijing believe the Punggye-ri nuclear facility is unstable and that just one more explosion could blow the top off of Mount Mantap, beneath which all six of North Korea’s nuclear tests thave been conducted.

That could lead to the mountain collapsing, causing radioactive waste to escape and blow aross the border into China just 50 miles away.

Researchers from the Chinese Academy of Sciences’ Institute of Geology and Geophysics warned Pyongyang delegates of the risk during a briefing in Beijing soon after North Korea’s last nuclear test on September 3, according ot the South China Morning Post.

Zhai Mingguo, a senior Chinese geologist who organised the September 20 briefing, told the newspaper: “This is a big, sophisticated problem requiring multiple, systematic approaches.”Our meeting is only a part of the efforts.”

The North Korea delegation was reportedly led by Lee Doh-sik, director of the Geological Research Institute at the State Academy of Sciences.

Another Chinese professor said the scientist was “a top geologist” but was not involved in the country’s nuclear development programme.

Sources described the meeting as “friendly” but would not reveal further details of the dicussions.

Relations between North Korea and China, the rogue state’s only ally, have become strained amidst Kim Jong-un’s obsessive pursuit of nuclear weapons.

Beijing has come under increasing pressure from the US to use its influence to try and de-escelate the fued between Washington and Pyongyang.

China has said it will strictly enforce UN Security Council sanctions banning imports of North Korean coal, textiles and seafood, while cutting off oil shipments to the North.

Kim Han-kwon, a professor at the Korea National Diplomatic Academy in Seoul said: “North Korea has been walking a diplomatic tightrope by taking advantage of strategic mistrust between China and Russia, but it has not been easy as Beijing has sternly responded to its nuclear and missile provocations.”

North Korea has not engaged in any missile or nuclear provocations since mid-September.

Last week it was revealed Pyongyang had written an open letter to Australian MPs asking them not to support US President Donald Trump, a move Canberra politcians showed the tough economic sanctions were working.