Iraqi Kurdistan offers to ‘freeze’ the results of independence referendum 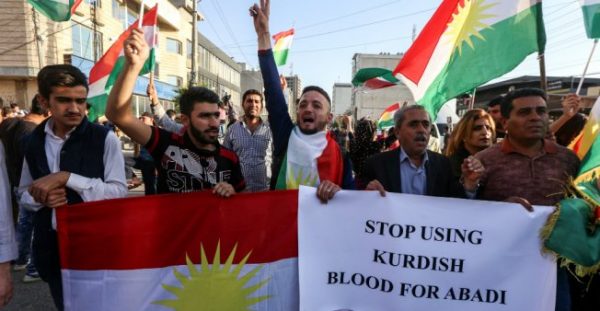 Iraqi Kurds take part in a demonstration outside the US consulate in Erbil, the capital of Iraqi Kurdistan, on October 21, 2017, to protest the escalating crisis with Baghdad. Safin Hamed, AFP |
Share:

Iraqi Kurdistan proposed Wednesday to freeze the results of its independence referendum, which triggered a major crisis with Baghdad.

Iraq has called for the cancellation of the results of the vote, which saw a massive “yes” for independence, as a precondition for any talks.

In retaliation, Iraq recently seized large areas of territory that Kurdish forces had captured over the years beyond the borders of the autonomous region.

In a statement released overnight, the Kurdistan government said it would “propose to the government and Iraqi public opinion (…) the freezing of the results of the referendum (…) and the start of an open dialogue between the government of Kurdistan and the central government on the basis of the constitution.”

The three-point text also proposes “an immediate ceasefire and cessation of military operations in Kurdistan”, after some 30 Kurdish Peshmerga fighters and members of Iraqi government and paramilitary forces died in operations “to restore central power” in the disputed territories, including the wealthy province of Kirkuk.

By losing the huge oil fields there, Kurdistan has seen the possibility of an economically viable state disappear, experts say.