Africa becomes the new battleground for ISIS and al-Qaeda, after their defeat in Mideast 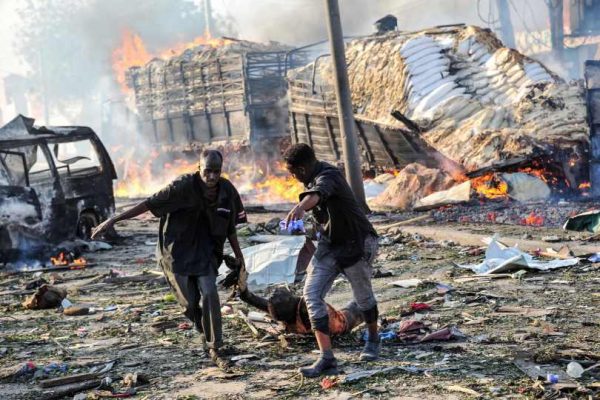 Two men carry the body of a victim following the explosion of a truck bomb in the centre of Mogadishu, on October 14, 2017. A truck bomb exploded outside a hotel at a busy junction in Somalia’s capital Mogadishu on October 14, 2017 causing widespread devastation AFP PHOTO / Mohamed ABDIWAHABMOHAMED ABDIWAHAB/AFP/Getty Images
Share:

A massive blast in Somalia’s capital of Mogadishu on Oct. 14 and more recent terror attacks in Somalia, Niger and Egypt highlight Africa as a new battleground against al-Qaeda and the Islamic State as they are being driven out of the Middle East.

The Islamic State, or ISIS, is seeking a safe harbor after major losses in Iraq and Syria. And al-Qaeda looks to secure its future by expanding operations and alliances in the sub-Saharan region, analysts say.

“The collapse of the Islamic State’s stronghold in Raqqa (Syria) will cause a re-coalescence of fighters on the continent, most of whom come from North African countries,” said Ali Bakr, an analyst specializing in terrorism at Future Advanced Research, a think tank in Abu Dhabi.

Tunisia alone has sent at least 6,500 volunteers who joined al-Qaeda and ISIS in Syria and Iraq, said Bakr. Many are now likely to join an expanding terrorist network in West and Central Africa, he said.

“The region is likely to be hit by a severe wave of returning Islamic State fighters while al-Qaeda expands into other states such as Niger, Burkina Faso and Nigeria,” Bakr said. “Niger has become a new source for recruits, and Ansarul Islam, an al-Qaeda franchise, is now active in Burkina Faso.”

On Oct. 4, militants believed to be affiliated with ISIS ambushed a team of U.S. troops in Niger, killing four soldiers and wounding two. The attack came as U.S.-supported Syrian rebels were on the verge of retaking Raqqa, the Islamic State’s de facto capital that fell on Oct. 17.

Somalia has been a frequent target of attacks, including one outside Mogadishu on Wednesday that killed at least 17 people. It followed the horrific truck bomb 11 days earlier in Mogadishu that was one of the deadliest terror strikes since the Sept. 11, 2001, attacks. The blast killed more than 350 and injured hundreds more. While no group claimed responsibility, the Somali government suspects al-Shabab, an al-Qaeda affiliate behind a wave of terror attacks in the region.

“I’ve seen seven suicide explosions in my life,” said Mohamed Haji Ingiris, 35, a Somali and political analyst at King’s College in London. “But this was the most devastating and traumatic experience ever.”

Ingiris had arrived in Mogadishu three weeks ago to conduct research, including interviewing defectors from al-Shabab.

Al-Shabab has been involved in 987 of 1,827 attacks by militant Islamist groups in Africa this year, according to the Africa Center for Security Studies in Washington, D.C.

The Somali group has had a long affiliation with al-Qaeda but now appears to be cooperating with ISIS, controlling much of the countryside, analysts said.

“Some told me they trained with Nigerians sent by Boko Haram,” said Ingiris, referring to the Islamic State-linked militants that have run rampant throughout West Africa. “Al-Shabab in East Africa is now stronger in Africa than al-Qaeda is in the Middle East and no longer looks to them for mentorship but still benefits from funds raised by their network in the Arab Gulf countries.”

In Egypt on Friday, dozens of police were killed in clashes with militants in the Western Desert, which is part of the Sahara. Three-quarters of the violent events linked to ISIS in Africa this year have occurred in Egypt.

A day later, gunmen in pickup trucks and motorcycles killed at least 12 soldiers in an attack on their base in Niger, about a mile from where the U.S. soldiers were ambushed near the Mali border.

The groups operating in the Sahara and Sahel are growing in size and reach, analysts and the U.S. military said.

The Islamic State has been battling rival forces in Libya, where the U.S. has targeted the militants with drone strikes.

France and other European countries stepped up anti-terror operations in Africa last year after an al-Qaeda affiliate attacked a beach resort in the Ivory Coast, a former French colony, and subsequently struck targets in Mali and Burkina Faso.

About 4,000 French troops are deployed in West and Central Africa, with headquarters in Chad, which has been battling extremists along with Cameroon and Nigeria. Germany has sent 1,000 troops to support a U.N. counter-terrorism operation in Mali.

The U.S. military has stepped up its anti-terror fight elsewhere in Africa to meet the growing threat, staging exercises and conducting training operations.

American military leaders have established a drone and air base in Agadez, Niger, and deployed 800 troops in the country to operate alongside anti-terror efforts in Nigeria and Mali, according to the U.S. Africa Command and the Defense Department.

The number of U.S. troops in Somalia has also quadrupled in the past year to 400 personnel, according to the Defense Department.

“We are assessing the needs of those who are directly fighting against al-Shabab,” said U.S. Army Maj. Leah Mock at the American military’s security cooperation office in Mogadishu. “This mission plays a critical role in enabling our partners to fight violent extremists.”

The escalation of that fight against al-Shabab may have led to the devastating Mogadishu truck bomb, analysts said.

Investigators in Somalia told local media that the bomber was a defector from the national army who joined al-Shabab after a U.S.-supported raid on the town of Barire about 80 miles southwest of the capital led to the deaths of 10 local civilians.

Analysts say the battle against the new wave of terror in Africa will require more than military operations. Also needed are better living conditions so people lacking basic necessities aren’t lured to work for the militants.

“Greater (economic) capacity has to be developed to countermand and understand this threat. That’s not really happening,” said Matt Bryden, chairman of Sahan Research, a Nairobi-based think tank.

Impoverished African governments also worry that even as they receive international military assistance, Western nations will scale back on desperately needed development programs.

They point to the landlocked nation of Burkina Faso, where on Sept. 3 the U.S. evacuated 124 Peace Corps volunteers from the country following an Aug. 13 terror attack at a restaurant in the capital, Ouagadougou.

“Peace Corps volunteers worked in rural areas, in remote villages, where the living conditions are tough,” said Boureima Ouédraogo, a city council member in Bokin, about 80 miles outside the capital. “The Peace Corps team was improving agriculture and education here. Now we need to find expensive temporary contractors to replace them. It’s a grave loss to our community.”

Underscoring the need for non-military aid, a report issued this week by the International Crisis Group found that the rise of Islamic militancy is a response to social problems.

“Economic conditions, especially poverty, underdevelopment and unemployment compounded by corruption and bad governance are incentives for terrorism,” said Augustin Loada, director of the Center for Democratic Governance, an independent policy research group in Ouagadougou. “These factors fuel the risk of violent extremism.”