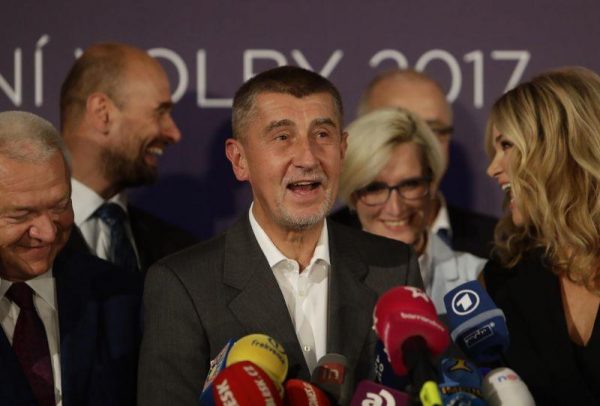 Babis’s ANO movement got 29.6 percent of the vote, nearly three times as much as anyone else in an election that saw a record nine parties secure seats in parliament’s lower house. He now faces the tricky task of finding willing government partners ready to overlook his legal troubles and domineering manner.

ANO is the first party to break a quarter century of dominance by two mainstream centre-right and centre-left parties, highlighting a shift in Europe where a refugee crisis has helped the rise of protest groups.

Babis has promised to bring his business expertise to government. He pledges to resist deeper integration of the European Union and any efforts in Brussels to force the country of 10.6 million to take in refugees.

The dramatic power shift comes as the Czech Republic has enjoyed rapid economic growth, a balanced budget and the lowest unemployment in the EU. Wages are growing at their fastest rate in a decade.

But unlike ANO, the Social Democrats — who led a government with ANO and another partner since 2014 — failed to capitalise on that, and had their worst showing, at 7.3 percent, since the country peacefully split from Slovakia in 1993.

Two other protest movements — the Pirate party courting unhappy liberals and the far-right, anti-EU SPD — surged to almost 11 percent each, making them, respectively, the third and fourth largest parliamentary players.

Babis faces tough negotiations after former partners the Social Democrats and centrist Christian Democrats both said on Saturday they could not be in a cabinet with anyone under police investigation.

The runner-up centre-right Civic Democrats also ruled out a government with ANO as well as two other small factions.

Babis was undeterred and said he would talk to all parties.

“I believe we will build a government that will be one team,” Babis told supporters and journalists at his party’s headquarters. “We want to fulfil our programme for a better life in our country.”

Drawing comparisons with U.S. President Donald Trump for his business background and anti-establishment message, Babis has maintained his popularity despite charges he illegally received a 2 million euro EU subsidy when he ran his food, agriculture and chemical empire, worth an estimated $4 billion, before entering politics.

He has denied wrongdoing and has also fought back against rivals questioning his past business practices and accusations of conflicts of interest.

His holdings, including interests in national newspapers and a radio station, were placed in a trust earlier this year.

Babis’s tough EU line and refusal to adopt the euro until the currency zone reforms have played well with eurosceptic Czechs but raised the prospect he may join Hungary and Poland on a collision course with the bloc.

But he also supports EU membership and does not share the relatively illiberal ideology of Budapest and Warsaw.

On Saturday, he said his party was pro-European despite reservations about talk of a two-speed Europe that could sideline countries like the Czech Republic which are not using the euro.

“It is not true that we are any threat. We are pro-European!” Babis said. “I am ready to fight for our interests in Brussels.”

At home, he has promised to use growth of over 3 percent to cut sales tax, lower income tax for most workers and ease the burden on companies. He pledges to build more highways in the next four years than what was completed in the past decade.

Whether he can find support for this programme is still a question. If coalition talks with mainstream parties fail, there is also the possibility ANO will form a cabinet with backing from the Communists or the far-right SPD.

President Milos Zeman has said he would allow a month for negotiations before calling a new parliament, the trigger for the current administration to depart.

He told online news website parlamentnilisty.cz he would not object to Babis forming a government even while facing police charges. He also said he would have no objections to talks involving SPD or the Communists.

A far-right party whose leader wants to quit the EU and urged Czechs to walk pigs near mosques and stop eating kebabs, performed surprisingly well in an election, potentially giving it a chance to influence how the next government is formed.

The SPD was set up in 2015 by Tomio Okamura, a half-Japanese entrepreneur who made his name by creating an off-beat travel agency for cuddly toys before entering politics.

“We want to stop any Islamisation of the Czech Republic, we push for zero tolerance of migration,” Okamura told reporters after his party won just under 10.7 percent of the vote, almost neck-and-neck with two other parties who were runners-up to Babis’s ANO party.
Okamura has also played on euroscepticism among many voters and attacked the Roma minority.

“The European Union can’t be reformed. It only dictates to us. We refuse the multicultural European superstate. Let’s leave the EU,” Okamura said at a party leaders’ debate just before polls opened on Friday.