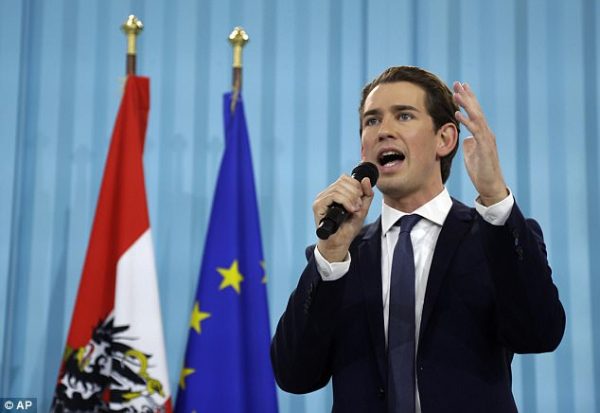 The world’s youngest leader, 31, wins power in Austria: Anti-EU ‘Wunderwuzzi’ who wants to cut benefits for foreigners triumphs in election – as the far right surges to second and is poised for coalition government
The leader of Austria’s right-leaning People’s Party has declared victory in a national election that puts him on track to become the world’s youngest leader.

Austrian foreign minister Sebastian Kurz, 31, claimed the win on Sunday night after projections gave his party a comfortable lead with more than 90 percent of the ballots counted.

He fell well short of a majority, but has not ruled out the possibility of forming a minority government once the final result comes in.

The young leader, dubbed Wunderwuzzi in his home country, which translates to Wonderkid, has pledged to cut benefits for all foreigners in Austria and has vowed to stop the European Union meddling in the country’s politics.

Kurz, dubbed the Conservative Macron due to his age and his party reform, said: ‘I would of course like to form a stable government. If that cannot be done then there are other options,’ adding that he planned to talk to all parties in parliament but would first wait for a count of postal ballots that begins on Monday.

That count will settle the close race for second place between the Social Democrats and the far-right Freedom Party.

Final results will not be available until mid-week after absentee ballots and ballots cast by voters away from their home districts are counted.

The projections showed the centre-left Social Democrats receiving 26.9 percent and the vote and the anti-migrant, eurosceptic Freedom Party 26.0 percent.

In his victory speech, he said: ‘I can only say, I am really overwhelmed. We campaigned for several months.

‘We built a massive movement. We had a goal to be the first ones over the (finish) line on October 15.

‘We have made the impossible possible. Thank you for all your work and for this historic success.’

‘Today is not about triumphing over others. But today is the day for real change in our country. Today has given us a strong mandate to change this country, and I thank you for that.’

‘We were handed a great responsibility from the voters, and we should all be aware of it. We should also be aware that a lot of people have put their hopes into our movement.

‘I can promise you that I will fight with all my strength and all my commitment for change in this country, and I want to invite you all to come along this path together with me.’

With the right-leaning People’s Party winning the election, but without a majority, the make-up of the Austrian cabinet is yet to be resolved.

Austrian foreign minister Sebastian Kurz, 31, claimed the win on Sunday night after projections gave his party a comfortable lead with more than 90 percent of the ballots counted.

He veered away from a commitment of a coalition, insisting every option was still on the table – including going into government with a minority.

More likely is a coalition with either the far-right Freedom Party or the Social Democrats.

With the Eurosceptic Freedom Party edging closer to finishing second in the election and with Kurz’s policies on immigration shifting right, a right wing alliance is emerging as the most likely outcome.

Centrist coalitions between the Social Democrats and the conservatives have dominated Austrian politics since World War Two, but many are deeply frustrated with the lack of progress in tax, pension, education and administrative reform.

For the Freedom Party, forming a coalition with the conservatives would be a milestone in Europe.

Here’s what the two parties stand for:

As well as his pledge on payouts to migrants, Kurz wants to slash Austria’s red tape and keep the EU out of national affairs.

At 31, Kurz is young even by the standards of Europe’s recent youth movement, which saw Macron enter the Elysee Palace at the age of 39 and Christian Lindner, 38, lead Germany’s liberal Free Democrats (FDP) back into the Bundestag.

Kurz and Lindner showed that young new faces can inject dynamism into old establishment parties that have lost their way with voters.

Kurz rebranded the OVP as the New People’s Party and changed its colours from black to turquoise.

Lindner used trendy black-and-white campaign posters that showed him staring at his smartphone to revitalise the FDP’s image.

Macron, who formed his own political movement, was able to paint himself as a rebel outsider despite having served for four years under failed French Socialist Francois Hollande.

And in Italy, where the two top candidates in next year’s election are likely to be Luigi Di Maio, the new 31-year-old leader of the upstart 5-Star movement and former prime minister Matteo Renzi, who at 42 looks old by Europe’s new standards.

By taking a hard line on immigration that left little daylight between him and the far-right Freedom Party (FPO), 31-year-old Foreign Minister Kurz managed to propel his People’s Party to first place and draw some support away from an FPO buoyed by Europe’s migration crisis.

Both parties increased their share of the vote from the last parliamentary election in 2013, marking a sharp shift to the right. Chancellor Christian Kern’s Social Democrats were in a close race with the FPO for second place.

Today Kurz was pictured voting in the Austrian capital Vienna alongside his girlfriend Susanne Thier – a finance ministry worker who he met at the age of 18.

Without revealing which way he was leaning on coalition talks, the 31-year-old told his supporters: ‘It is our task to work with all others for our country.’

Austria, a wealthy country of 8.7 million people that stretches from Slovakia to Switzerland, was a gateway into Germany for more than 1 million people during the migration crisis that began in 2015.

Many of them were fleeing war and poverty in the Middle East and elsewhere.

Austria also took in roughly one percent of its population in asylum seekers in 2015, one of the highest proportions on the continent.

Many voters say the country was overrun.

Kurz’s strategy of focusing on that issue appears to have paid off.

Kurz, named party leader only in May, has been careful to keep his coalition options open, but he called an end to the current alliance with the Social Democrats, forcing Sunday’s snap election.

He has pledged to shake up Austrian politics, dominated for decades by coalitions between those two parties.

While that would suggest he will turn to the anti-Islam FPO, he has also said there could be leadership changes within the losing parties, a possible hint at being willing to work with the Social Democrats if Chancellor Christian Kern were ousted as leader by Defence Minister Hans Peter Doskozil.

Kern, however, said he intended to stay on as party leader.

Asked if the loss would have an impact on his political career, Kern said: ‘No, I have said I will stay in politics for 10 years and there are nine years to go.’

Austria’s hard-right Freedom Party has a shot at sharing power after elections on Sunday, having narrowly lost out in a presidential vote last year.

A far-right party has also had some success in Germany, in September becoming the first such party to enter the Bundestag since the end of World War Two, but their counterpart in France is faring less well.

Here is a snapshot of some of the far-right parties in Europe.

The eurosceptic and anti-immigrant Freedom Party (FPOe) came close to winning the presidency in December, which would have made its leader the European Union’s first far-right president.

One of Europe’s most established nationalist parties, it is forecast to come second or third in this weekend’s vote and could become junior coalition partners to the favourites, the conservative People’s Party (OeVP).

Founded in 1956 by ex-Nazis, the party earned a stunning second place in 1999 elections with nearly 27 percent.

The openly anti-immigration and Islamophobic Alternative for Germany (AfD) is the third-biggest party in the Bundestag after the September election, a political earthquake for post-war Germany.

The party took nearly 13 percent of the votes, having failed in the 2013 election to make even the five percent required for representation in parliament.

It has more than 90 seats on the benches of the parliament that meets for the first time on October 24.

This was double her father’s 17.8 percent score when he reached the second round in 2002.

In campaigning, Le Pen vowed to abandon the euro, reinstate control of the nation’s borders and curb immigration if she won.

But the party fared badly in June parliamentary elections, taking just eight seats out of 577.

Tensions since then burst into the open when Le Pen’s right-hand man Florian Philippot quit and looks set to go his own way.

The Movement for a Better Hungary, known as Jobbik, is ultra-nationalist and eurosceptic. It is the second largest party in the legislature but has been outflanked by Prime Minister Viktor Orban’s own hardline anti-immigration stance.

The Northern League is a ‘regionalist’ formation that evolved into an anti-euro and anti-immigrant party that secured 18 seats in the 2013 parliamentary election.

The next general election must be held by spring 2018 and the party is hovering at around 14 percent of voter intentions.

The neo-Nazi Golden Dawn finished third in the September 2015 election, with seven percent of the vote and 18 MPs. One later defected and the party is now the fourth biggest in parliament.

The Sweden Democrats party, with roots in the neo-Nazi movement, made a breakthrough in September 2014 to become the country’s third biggest party with 48 of 349 seats and nearly 13 percent of the vote.

The anti-Islam Freedom Party (PVV) of Geert Wilders in March became the second party in parliament, with 20 seats in the 150-member parliament.

The nationalist United Patriots coalition entered government for the first time in May after coming third in a March election. It is the junior party in the governing coalition.

In March 2016 the People’s Party Our Slovakia benefited from Europe’s refugee crisis to enter parliament for the first time, winning 14 seats out of 150.

The Social Democrats (SPO) have also opened the door to forming coalitions with the FPO, meaning the far-right party may be able to play the two parties off against each other during coalition talks.

But it is highly unlikely that the Social Democrats would ally with the FPO if the SPO came third.

A clear picture of the race for second place may not be available until Monday, given the large number of postal votes – roughly one in seven – most of which will not be counted until then.